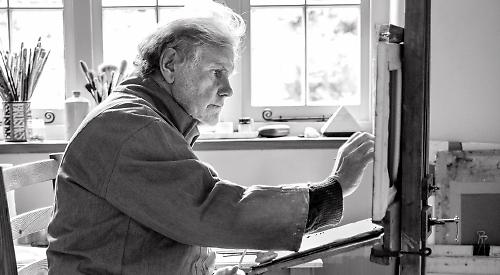 SIX artists are the subject of a new photography exhibition at Watlington library, writes Anna Colivicchi.

They include painters, mosaic artists and a stonemason who were photographed by professional Mark Lord during April.

The exhibition, called Master Crasftmen and Women, features both black and white and colour images.

Mr Lord, 45, who has lived in Watlington for 15 years, said: “I’ve always enjoyed photographing people with their art.

“These are six masters who made a living from their crafts — as a project, I thought it was just right up my street.

“I fell in love with photographing people when I lived in Cornwall and did a project on the people that lived in the village I grew up in using a black and white film.

“For this exhibition, my interest was in the town and the people who make it what it is as well as the crafts and traditions themselves, which may be lost over time.

“What I love about Watlington is the local talent that we have. I adore this town and its people.

“I think covid has made the community much tighter and I really feel connected to them now.”

Mr Lord, who lives with his wife Becky, said it was good to be able to photograph the artists despite the coronavirus restrictions being in place at the time. He said: “I made the sessions very short and as safe as I could.” The artists are Jane White, John Nuttgens, Jeffery Courtney, Peter Foster, Margaret Peach and Angela Swan.

Mrs White, a ceramic artist who exhibited her work at the Granary Café in High Street during Watlington Artweeks in May, was photographed by Mr Lord in her studio.

She said: “He spent the whole day with me and took some beautiful pictures. I was showing him how I work.

“It was good to have someone observing me in my studio but, if I’m honest, you are not going to make any of your best work when someone is watching as it’s about completely immersing yourself and the quietness of it.

“I’m fortunate enough to get to work in a beautiful setting and I know that is not always possible for artists, especially nowadays.” Mrs White specialises in ceramics which derive their colours and patterns from firing with organic material in a large open pit.

She said: “For most of my life I have been involved with ceramics in one way or another but it has been only recently that I’ve focused on my art full-time.

“I’m doing an unusual form of art which usually attracts people’s interest. It’s the scale of it which gives it that spectacular result.

Jeffery Courtney, a painter, was photographed as he was mixing egg tempera, a mixture of coloured pigments, water and egg yolk, which he uses in his work.

He said: “We had a bit of a chat about my work and he took some nice shots of me in my studio and it was very enjoyable.

“I showed him how I make tempera, which is quite unusual.”

Mr Lord said: “The exhibition is not really about the photos, it’s about the people who are the heart of Watlington and should be celebrated.

“I could photograph people like that all day long to be honest. These artists are all so good at something different and I love their crafts — they really are masters.”

• Master Crasftmen and Women will run until mid-August.