Jesus is born in a station 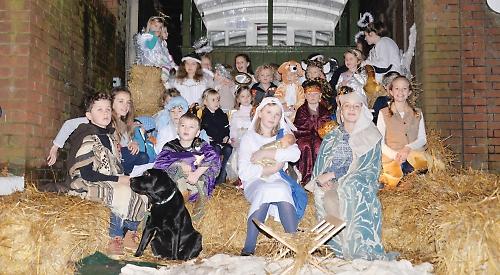 About 200 people watched the 12th annual production at Somersham station in the grounds of Sir William and Lady McAlpine’s Fawley Hill estate on Sunday.

The traditional nativity play featured children from the village and surrounding area performing on the track and platform, which were built by Sir William in 1960.

At the end of the line there was a tunnel with a stage made from hay bales.

The Rev Stephen Southgate, who became rector of the Hambleden Valley in June, narrated the play.

He wore a stationmaster’s cap and carried a clipboard when he arrived on the British Railways Class 03 diesel engine owned by Sir William. Three angels accompanied him along the track.

Mary, played by 10-year-old Amber Butler-Adams for the second year running, arrived on a “donkey”, which was in fact a five-year-old Dartmoor Hill pony called Badger owned by the McAlpines’ Brackenhill stud.

Joseph, played by 11-year-old Euan English, who was also reprising in his role from last year, arrived on the diesel engine.

A star above the stage was lit up and the angels came down from above after “following” the star.

The shepherds came down from the “hills” and the kings joined them after arriving on the engine while the audience sang We Three Kings.

In the stable were Boris, the McAlpines’ Labrador, and Storm, a puppy belonging to TV presenter Ben Fogle.

Carols including O Little Town of Bethlehem, Silent Night, Away in a Manger and O Come, all ye Faithful were sung during the play with accompaniment from Suzannah Freer and Graham Wheeler, from the Hambleden Valley group of churches’ band.

The performance finished with prayers led by Rev Southgate.

Afterwards the children were treated to a visit by Father Christmas, who arrived on the front of the train with a sackful of presents accompanied by Lady McAlpine.

As they arrived, the audience sang We Wish You a Merry Christmas and a snow machine was turned on. The youngsters rushed up to see Santa and each child was rewarded with a gift.

Rev Southgate said: “I am a big fan of steam trains and colourful celebrations, so I loved the railway nativity. It’s one of the things they put in the profile of the parish that made me think I should apply for the job. This is just the kind of thing I was looking for with its colourful, chaotic joy.”

Collections were made for the Chiltern Centre for disabled children in Henley, St Mary’s Church in Fawley and the Kasisi Orphanage in Zambia, raising more than £800.

Lady McAlpine said: “I think the railway nativity is better than ever. We were lucky with the weather and I’ve had a lot of help this year, which has been tremendous. I think it was brilliant fun.”

Earlier in the day there was a gingerbread house workshop for children and a small Christmas market with pop-up bakery Compassionate Loaf, antiques, jewellery, decorative gift items and Christmas decorations on sale.

Mulled wine, coffee and mince pies were available all day and evening. The

full cast was as follows:

Angels: Zara and Rose Perisce, the Hamilton girls and visitors