Mother and daughter on free sun holiday... for TV 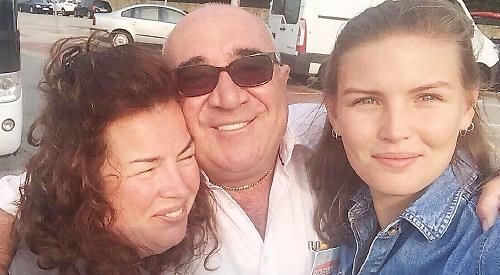 A MOTHER and daughter say appearing on a television reality show has brought them closer together.

Helen and Hannah Twigger, from Fawley, spent nine days travelling from France through Spain en route to Tenerife in the current series of Coach Trip on Channel 4.

They were among the original seven pairs to board the coach, which is led by Brendan Sheerin, the show’s host and tour guide.

Each day they would take part in two activities, either as pairs or in teams, before voting for the couple they want booted off the trip.

The duo that receives the most votes is awarded a yellow card and after two yellows they receive a red and have to leave.

Hannah, 23, applied to go on the show because she used to watch it and her mother, who rarely takes a break with her husband, Roy, who is the estate manager at Fawley Hill, the home of Sir William and Lady McAlpine.

Mrs Twigger, 55, said: “My husband doesn’t do holidays and I love being with him, the love of my life. Twenty-six years and I am still madly in love with him.”

Hannah said: “I wanted to take mum travelling and thought that this would be a good opportunity to get away. It looked like a good laugh.”

She was one of 15,000 people to reply to an advert posted on Facebook last summer appealing for contestants. Two weeks later she and her mother were invited to London for an audition.

Hannah said: “It was so they could see what we would be like in front of the camera. We were asked questions like what did we do for a living and we had to tll a little story about ourselves.

“I told of how I had a small operation last year and that I had to take it easy and not do any physical activities.

“When I thought I was much better, I went downstairs and all of a sudden I felt myself going faint. I was swaying a bit and my mum thought that I was dancing. I remember going to ground and her saying that I was the worst dancer ever.”

Two days after their audition, Hannah received an email saying they had been successful.

Filming took place in September and they were flown to Biarritz to join the coach. Hannah and her mother were greeted by Sheerin with a hug and a kiss.

The show does not try to match contestants looking for love but this was still encouraged by Sheerin who asked for “gossip” every morning.

Mrs Twigger joked: “We will have a bid” to which Hannah replied: “Oh my God, I am not an auction — you are not my pimp.”

In episode two Hannah came under the eyes of self-proclaimed “Casanovas”, Ibiza holiday reps Korey and Nathan, who were both single and “ready to mingle”.

Korey told the cameras he “fancied” Hannah but was told that he would need to impress her mother, to which he replied: “Ah, trust me, Helen is like my nana.

“I need to get the mama’s permission — the big H, the big don, and if I get that permission, I’m moving to Reading. I’m packing my bags and that’s where my next courtship will be.

“Hannah’s like… if she was in the Hogwarts, she’d be in Slytherin, she is that hot.”

When it was pointed out that Hannah actually came from Henley, Korey says: “I thought they were from Reading. Sorry, Henley, wherever that is.”

The other activities that Hannah and her mother took part in included paddle boarding, archery, a forest assault course, cider pouring, an art class and flower arranging.

In episode 4, in Santander, the pairs did fly-boarding. Hannah said: “I was so scared — I was getting more and more terrified and it freaked me ou but I absolutely loved it. It was so much fun.”

She also became emotional watching her mother trying it as it had been on her “bucket list”.

Hannah told the cameras: “I’m getting a little bit teary. I can’t believe she’s doing it. Normally, on my travels, I go out, do it, come home and tell mum. Now you’re joining in. Oh my God, someone get the tissues. Even to get out there is so good for her. I was so proud.”

When Mrs Twigger came out of the sea Sheerin called for three cheers.

Hannah found it confusing and said: “It brought back traumatic flashbacks of my childhood ballet lessons. I got kicked out as I’m not graceful, apparently.”

She and her mother received their first yellow card in episode 8, in Santiago de Compostela, which marked the arrival of new competitors Lewis and Adam, who voted for them to be given a yellow card.

Lewis explained: “Sometimes I feel I might have to watch what I say because it might be taken as offence. There is a level of respect there that I can’t cross with someone I look at who could be like my mum.”

The Henley women had tied with another pair in the vote so the other couples conferred and decided to award them a yellow card.

Hannah was upset and told the cameras that the other contestants had given a “stupid reason” and that her mother was picked on for being an “older lady”.

The next day, in Vigo, they were handed their second yellow because some of the other contestants were surprised by how badly they had taken the result of the vote the night before.

Hannah invited the others in for a hug but afterwards said: “We couldn’t have stayed any longer with some of those snakes.”

Now back home, she said she was disappointed with how they left the show.

Hannah explained: “Getting the first yellow card was fine but a new couple made a few comments, saying because mum was older she shouldn’t be on the coach.

“There was also another comment, which wasn’t shown, saying she couldn’t keep up. I was upset, not because of the yellow but because of the comments. Then they turned on us.”

Despite the way they left the show, Hannah said she and her mother are not bitter.

“We were there seven whole days without a single vote so we are proud of ourselves,” she said.

“I loved the fly-boarding. We had never had the opportunity to do anything like that and to be able to see my mum doing something like that made me so proud.”

Another highlight was the forest assault course because she enjoyed jumping up and down on the bridges to scare Ryan, a contestant with whom she made friends.

Hannah said that love did not blossom for her on the coach.

“Nothing happened between me and Korey,” she said. “He was very flirty and I didn’t appreciate some of his comments. There were numerous occasions where we did sit down and he started flirting but in the end I just wanted them to leave me alone.”

Since the show, Ryan has visited her from his home in Brighton and she speaks to another contestant, Hoogy, from Ipswich, almost daily.

“I think it’s just a friendship, although mum thinks otherwise,” she said.

Mrs Twigger, who works with her husband, said she had “loved every second” of the experience.

“My favourite was the body boarding. It was so much fun and we were laughing all the time. For me it was like being in a tumble dryer. Hannah had to come to my rescue in the end.

“The whole trip made me feel so young. They treated me like an equal and there was no discrimination because I was older. Every day I did all the activities and I wouldn’t have changed it for the world.

“I think my only cringe moment was on the first day when we were all running along the beach and you could see the cellulite on the back of my legs. I should have run in front of everybody!”

Mrs Twigger, who also has two sons, Troy, 25, and Mckie, 20, who work as tree surgeons locally, said she was grateful to her daughter.

She said: “Hannah goes travelling a lot and relays what she has done so to be able to go away and do this with her was amazing. It was a lovely thing to do with my daughter. It brought us closer together.

“We also got recognised in Waitrose in Henley by a staff member who said, ‘you were the two who were on the coach’. I could have kissed him!”