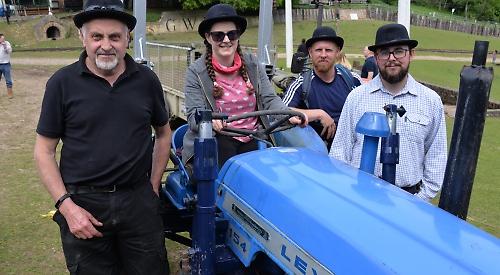 More than 200 people took part in the event in which 83 vintage tractors were driven across the Hambleden valley.

They also held a two-minute silence for Sir William McAlpine, of Fawley Hill, a well-known figure in the vintage community, who died in March last year.

The drivers met in Fingest at 8am for bacon rolls, tea and coffee supplied by about 12 volunteers. Before they set off Rev Steven Southgate blessed the tractors, some of which were made in the Thirties.

Organiser Gary Anderson, from Moor Common, led the convoy on his little grey 1953 Fergie and was accompanied by his son Henry, 15, wife Heley and mother Barbara.

The tractors went via Ibstone, North End, Turville Heath and Stonor before arriving for a barbeuce lunch at Fawley Hill with burgers supplied by Lacey’s Family Farm, of Lane End. The participants also held a singalong, with tunes including  Down at the Old Bull and Bush and The Lambeth Walk. There was a raffle with prizes such as chocolate and wine.

A trustee from Thames Valley Air Ambulance, the beneficiary, thanked the drivers for their donations, which are expected to total several thousands.

After lunch they drove around the animal sanctuary on the estate which has wallabies, deer and emu.

After the silence for Sir William, they set off back to Fingest via the Hambleden estate and country lanes.

About 12 marshals lined the course and made sure no one got lost. Two tractors had to be towed back after they broke down.

Mr Anderson said: “Everybody enjoyed it and had great fun.

“We had a bit of a cross-section of people from farmers to tractor enthusiasts and even professional business people.

“We had one or two drivers from the Cotswolds because the Chilterns have such a good reputation.

“The biggest thanks I have to pass on is to the landowners and farmers for permission to use their land for this. Without them we can’t do anything at all.

“We are very lucky to be living in this area — some of the most beautiful countryside in the UK.

“The run is all about supporting charitable causes. We do it to raise money and I say to everybody that it’s a fun, family day and I want people to enjoy it. The feedback has been superb — very positive. On reflection, it was a great day.

“Everyone is a big supporter of the air ambulance. It’s popular with the rural community.”

Joseph Meakes, 29, who drove a Leyland 154, said: “We have done all 13 runs and I enjoy it because it is local — plus you never know if you are going to need the air ambulance, especially because of the area we live in. If someone gets stuck in the middle of a field, the quickest and easiest way to reach them is by helicopter.”