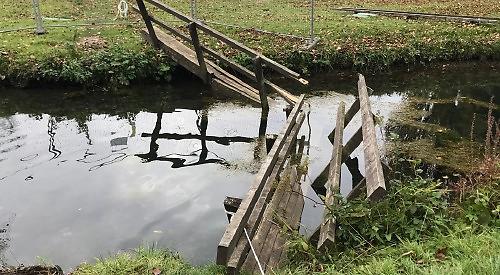 A PEDESTRIAN bridge on a riverside public footpath near Henley will not be repaired until 10 months after it
collapsed.

A section of the path has been shut since the bridge on the western bank near Fawley Court broke in November.

Buckinghamshire County Council, which is responsible for the bridge, was supposed to have begun preliminary work last week and then erect a new bridge this week.

It had said work couldn’t be done sooner because of poor weather, which angered walkers, who said they were forced to walk along the busy Marlow Road instead. This week, the council said the latest delay was down to getting access to the site and the work would now take place until August.

Bill Chapple, cabinet member for planning and the environment, apologised and said its rights of way team were told that access to the site was not possible until after the royal regatta.

This was because Fawley Court was hosting its annual regatta event and didn’t want the work being carried out at the same time.

But the owners of the house have denied this, saying that they have fully co-operated with the council and worked hard and at great expense to have the work done.

Michael Wood, director of ET Landnet, said: “The completion of these works still requires the contractors to provide the detail of what works they will be doing and for the specific access arrangements to then be put in place.

“Had this been addressed immediately by the council when the bridge collapsed this would not have resulted in the considerable delay or for the perception that has been conveyed that the delay was the responsibility of Fawley Court.”