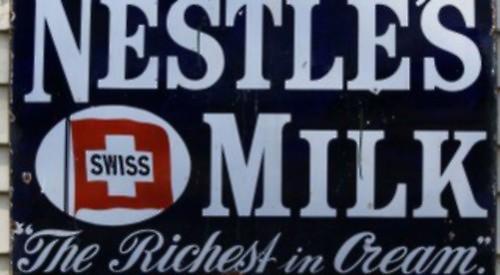 THIEVES stole old advertising signs worth thousands of pounds from a country estate near Henley.

About 24 enamel signs were taken from the railway station at Fawley Hill, which was created by the late Sir William McAlpine.

The businessman and steam enthusiast, who died in 2018, built the full-sized railway at the estate, which included the original station from Somersham in Cambridgeshire, which was closed in the Sixties.

His widow Lady McAlpine said she was “absolutely furious” about the theft, which happened during Sunday night.

She said: “I’m just very grateful Bill wasn’t alive to see it happen. My estate manager found out on Monday afternoon when he came down. It was one of those unfortunate things, nobody was around the station.

“The signs have been amassed over 50 years. They are collectable and they are very valuable — the big ones are worth a couple of thousand pounds each. It depends on the rarity and the ones they have taken are quite rare. It makes you feel sick because there they were, part of the building, and now they are gone.

“Not only do they want the results of our hard-earned money, they also don’t understand these things have huge sentimental value. We won’t get them back. They will sell them on eBay, I should think.”

The stolen signs include those advertising Nestlé’s Milk, Virol, which was a nutritional supplement, G.P. Government Tea, the London Daily Chronicle and Lyons’ Cocoa as well as tobacco and cigarettes.

Lady McAlpine said she didn’t know how the thieves had entered the estate.

“There’s no sign of a vehicle on CCTV,” she said. “That’s the worrying thing. The signs are heavy but they only took relatively small ones, they didn’t take the very heavy ones.” The estate has removed the remaining signs from the station.

Lady McAlpine added: “Everybody looks at increasing security when they lose something. It does make you think we should have yet more security, which is pretty sick.”

Sir William started his career at the Hayes depot in Middlesex, a 30-acre site which housed the McAlpine railway locomotive and wagon fleet. He ended up running the company’s Scottish and northern business from Glasgow.

He returned to Hayes to find the company’s Hudswell Clarke 0-6-0ST No 31 was due to be scrapped so he bought it for £100 and moved it to his home. This marked the start of the Fawley Hill railway, a private track which is now more than a mile long and features the steepest non-rack gradient in the world.