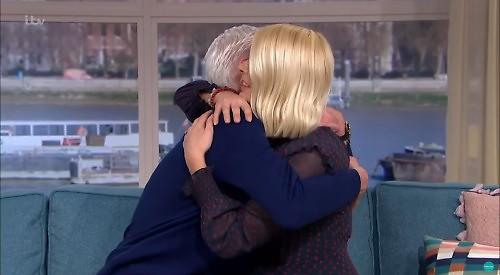 TELEVISION presenter Phillip Schofield has been praised for his bravery after he came out as gay.

The 57-year-old, who lives in Fawley, announced on his Instagram page last Friday that he had been struggling with “inner conflict” about his sexuality for some time.

He discussed the issue further on that day’s episode of ITV’s This Morning, which he has presented since 2002, with his co-hosts Holly Willoughby, Ruth Langsford and Eamonn Holmes.

Schofield said he had the support of Stephanie, his wife of almost 27 years, and their grown-up daughters Molly and Ruby. The couple say they have no plans to divorce and Mrs Schofield has praised her husband for taking a “brave step”.

Schofield has also been backed by the Chiltern Centre for disabled young adults at Greys Road, Henley, of which he has been a patron since 2009.

Last November he donated £20,000 to the charity after receiving a cheque from DJ Chris Evans, who had raised it through his Carfest music and motoring festival.

In a statement on its Instagram page, the centre said: “We have been incredibly lucky for many years to have the patronage of Phillip Schofield.

“His generosity, kindness and support has been consistent and deeply appreciated. His recent donation of £20,000 is just one example of his wonderful community spirit.

“We stand firmly with Phillip as he and his family move forward from the announcement that he is gay and commend both him and his whole family for their bravery in honestly and openly talking about matters that are very personal to them.”

Paul Barrett, its chairman of trustees, told the Henley Standard: “I think it was incredibly courageous of someone in his position and with his high profile to make that statement in the knowledge that it’s going to be very painful for those closest to him.

“My first thoughts were for Steph and his family but they have obviously been aware of the situation for some time. I’m sure that everyone sympathises with Phillip’s predicament and wishes all happiness to him and those he loves.

“It’s clear he is now relieved that he has shared what had become an intolerable burden to keep secret.

“We haven’t spoken with him formally since the announcement – I gather some of us have corresponded with him or the family individually but that is a private matter.”

Last year Schofield invited nine members of the Henley Women’s Institute and a group of students from The Henley College to take part in a televised blind taste test of various Christmas puddings.

This was shown as part of ITV’s annual festive special How To Spend It Well At Christmas, in which a pudding made by budget supermarket Lidl triumphed over its costlier rivals.

Struggling to hold back tears, Schofield told Willoughby: “With every person I tell, it gets a little lighter and a little lighter… this decision is essential for me and for my head.

“Steph and I have never had any secrets. It’s tough but this isn’t something that’s happened quickly – I’ve had to deal with it in my head for quite some time. She is amazing – there’s nobody else in my life who would have supported me in this way.

“I’m very conscious of the hurt and my overriding emotion with my family is obviously guilt as this wasn’t going to be anything other than a painful process for them but at the same time I can sit here and say I’m proud of myself.

“When I sat my daughters down and told them, they jumped up and gave me a big hug, then hugged Steph and said ‘this is fine, we will be okay’. We’ll always be a family, us four.

When asked if he had plans for another relationship, he said: “I’m not thinking about the future – I’m taking one day at a time.”

Willoughby hugged him and said: “Whatever happens, I’ll be by your side” and the audience applauded loudly as he hugged his other co-presenters.

Holmes said: “No-one should be embarrassed about their sexuality. It’s fantastic that you’ve spoken out and many people will be strengthened by what you’ve said.”

Mrs Schofield said in a statement: “I love Phillip as much today as I ever have, and always will.

“We've been awestruck by the strength and love of our precious girls, even as they've been trying to make sense of it all for themselves. Our family has also been so supportive and will help us going forward.

“Although this is difficult for us all, I support Phillip in this taking this brave step and I will still be there, holding his hand. Everyone should be proud to live their own truth.”

In recent years, Schofield has also opened Fawley village fete and given out festive treats at The Herb Farm in Sonning Common as part of another edition of How To Spend It Well At Christmas.

He was profiled in 100 Faces of Henley, a book containing photographs and potted biographies of noted local residents which was sold in aid of various good causes, in 2012.