Villagers upset that pub won’t be revived after all 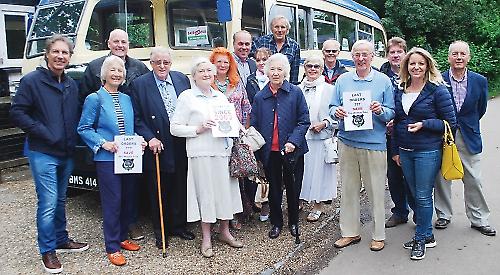 AN old village pub has still not been rebuilt more than two-and-a-half years after planning permission was granted.

Residents thought they had won a 14-year fight after plans to demolish the Walnut Tree in Roundhouse Lane, Fawley, and build a new pub in its place, along with four houses, were approved by Wycombe District Council’s planning committee in June 2017.

Much of the £2 million that the development was expected to cost would have come from the sale of the homes.

But since then the plans have stalled and villagers are becoming increasingly frustrated.

However, Mr Shlewet wants what he paid, plus all the costs involved in drawing up the plans, which comes to nearly £1 million.

Mark Turner, who chairs the Fawley parish meeting, and member Rennie Valentine are concerned as the planning permission will expire in June.

Mr Shlewet bought the former Red Lyon pub in Hurley and spent millions refurbishing it in a 24-month project before opening it in 2016 as the Hurley House Hotel.

Councillors Turner and Valentine said this had taken priority and Mr Shlewet was now putting all his energy into running the venue.

Cllr Valentine said: “It clouded his view of this place. Had he not bought it, this would have been built. The planning permission runs out in June. If you don’t have a spade in the ground and the foundations laid the council will say planning permission has gone and then you’d have to reapply.”

Cllr Turner said: “The Hurley House Hotel is a massive beast to feed. At the same time he has an international school in Marylebone and he has got a young family so, to give him his due, he is stretched pretty thin.

“The wheels started to fall off because basically nothing happened and we started saying to Bassam ‘what’s happening?’ and he said ‘I’m too busy with this, that and the other’.

“It’s not that he can’t afford it because he’s a very wealthy man. I don’t think he really wants to spend that much money again and run two establishments. He’s prepared to sell it to the village for what he bought it for, plus his costs. It has put us in a worse position than if we’d bought it in the first place — we have gone back three paces.

“There are people in the village who would support buying it but it has got to be at a realistic price.

“The difficulty we have is that he is not looking at this as being a pub. He’s thinking of how he can sell it. He doesn’t want to lose his money. I understand as if I’d spent £1 million on it, I’d want it back.”

Cllr Turner said Mr Shlewet attended a village meeting in June 2015 where he introduced himself and his architect and said he wanted to bring back the pub so the community had supported him.

“He has gone from being the village benefactor to, sadly, being just another property developer,” he said.

“The question is what he’s going to do next. We’re in limbo and the planning permission is ticking away. I just don’t think anybody’s going to buy it at the price he’s asking.”

Cllr Valentine added: “If we can buy it and build it at the right price then we can offer a tenancy. For us it’s more important to have the right tenant in, a fair price and we end up with a good pub.”

Residents formed an action group after the pub closed in 2003 and there were plans to convert it into a house. The proposal was rejected by the district council and on appeal and then the pub fell into disrepair.

Mr Shlewet bought it in 2011 for £687,000 plus VAT from property developer Grahame Bryant, of Chesterton Commercial.

More than 20 residents attended the planning committee meeting in High Wycombe in 2017 and were taken there in a vintage bus owned by Nick Sargent, a former chairman of the Fawley parish meeting.

They had printed signs reading “Last orders” and “Saving the Walnut Tree since 2003”.

Lady McAlpine, who lives at Fawley Hill and was part of the campaign to rebuild the pub, said she was “absolutely livid” nothing had been done.

“He’s never here and he’s not part of the village and made no attempt to be.

“We have planning consent for a really good scheme and some houses, which we need in the village, and he’s now saying he wants to sell it. The sad thing is we like him and his wife.”

The village has registered the pub as an asset of community value, which gives residents six months to bid on the property before it can be sold on the open market.

However, Mr Shlewet is not obliged to accept a bid.