New setback for villagers trying to revive their local 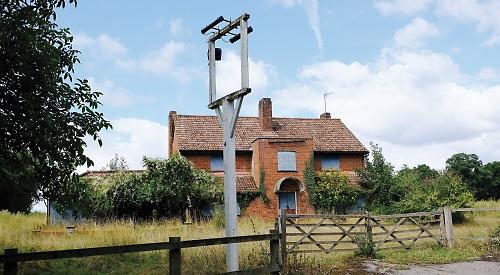 VILLAGERS who have been campaigning for almost 20 years to have their pub rebuilt have suffered another setback.

They failed in a bid to keep the Walnut Tree at Fawley designated an asset of community value by Buckinhamshire Council.

This would have made it harder for owner Bassam Shlewet to be able to secure planning permission for a change of use to housing.

Now Mr Shlewet, who bought the former Brakpear pub in 2011, has said that he no longer intends to open a new pub on the site despite before being given permission by Wycombe District Council in 2017.

Residents claim he now wants to build housing only.

He has carried out groundworks at the site, so the consent didn’t expire as scheduled on May 1 and will now last indefinitely.

Mr Shlewet, who also owns the Hurley House Hotel, has permission to knock down the pub and build another in its place together with four houses, which would have been sold to meet most of the £2 million costs of the development.

However, frustration among villagers at the lack of progress had been mounting for some time and eventually a group of residents offered to pay between £450,000 and £500,000 for the property.

Mr Shlewet wanted £1 million to cover the £687,000 purchase price and the cost of drawing up his plans.

At Fawley’s recent annual parish meeting, residents blamed his change of heart on the poor financial performance of the Hurley House Hotel, formerly the Red Lyon, which he spent millions on refurbishing before re-opening it in 2016. One villager claimed he had incurred “considerable” losses and wanted to recoup the money so had lost interest in the Walnut Tree.

Mark Turner, the meeting’s chairman, said Mr Shlewet had indicated that he planned to build houses on the site and not rebuild the pub and would speak to villagers about this.

Residents agreed they couldn’t do more until they knew the details but many were against housing without a pub. They disputed the owner’s claim that the pub would no longer be viable as pubs in other small villages, such as the Bottle and Glass Inn at Binfield Heath and the Crooked Billet at Stoke Row, were successful.

Paul Clerehugh, who runs the Crooked Billet, had expressed an interest in the Walnut Tree and the villagers said it would have a better chance of success as a free house.

They might make enquiries about a new government scheme in which communities can claim grants of up to £250,000 to buy a pub deemed to be under threat.

Some said there should be a survey as many residents had moved to Fawley since the pub closed in 2003 and might not actually want it back.

However, others said the pub had been a “hub” which brought the village’s different social groups together.

After the meeting, Councillor Turner urged Mr Shlewet to accept the £500,000 offer because the building had deteriorated and was no longer worth its 2011 price. He said: “Mr Shlewet isn’t bothering with our pub because of what’s happened with his hotel.

“He has spent millions but he overspecs everything — the Red Lyon was a decent roadside pub but wasn’t going to be anything more and he’ll be paying for that for a long time.

“He has told everyone he’s not going to build the Walnut Tree yet he has gone through the process of cementing his permission.

“However, those ‘enabling works’ only allow him to build houses if he also rebuilds the pub, otherwise he will need fresh planning consent.

“Sadly, it seems the council backed down on our community asset bid when faced with his legal opposition, presumably to avoid spending money.

“Despite this, he doesn’t have many choices because a recent survey found the village was against any other use.

“The four proposed houses were a bit controversial at the time but we were broadly happy to accept them as a compromise.”

Mr Shlewet first introduced himself to the village at its 2015 meeting, where he attracted the community’s support by promising to revive the pub.

Before Mr Shlewet bought the pub, a previous owner also submitted plans to convert it into a house so residents formed an action group to fight it.

The proposal was rejected by the council and the owner lost an appeal so the property has been falling into disrepair ever since.

According to the Hurley House Hotel’s most recent accounts, it made a £3.68 million loss in the financial year ending March 31, 2020. The year before that, its losses totalled £2.54 million.

Mr Shlewet said: “I’m not a property developer and the scheme for which we got planning permission looked feasible and attractive at the time.

“However, when we did proper costings through an independent, reputable firm of quantity surveyors, I was very surprised with the estimated cost and lost my appetite for the project.

“I am dealing with many other projects apart from Hurley House, and whether these are profitable or not is immaterial to the Walnut Tree project.

“But Hurley House did open my eyes to the challenges and costs involved in operating a hospitality business in a remote location, which I do not believe the villagers are aware of.

“I am still considering all the options but it’s worth noting that I have been approached in confidence by numerous members of the community, who told me that they do not want a pub in this location, especially after 18 years of closure with the additional traffic, noise and all the other nuisance it is likely to generate.”

Buckinghamshire Council confirmed it had reviewed its decision to list the Walnut Tree as a community asset at Mr Shlewet’s request and agreed that because of its lengthy closure, the former pub no longer met the legal requirement of having “furthered the social wellbeing of the community in the recent past”.