'After my injury I could hardly walk... but now I'm skydiving!' 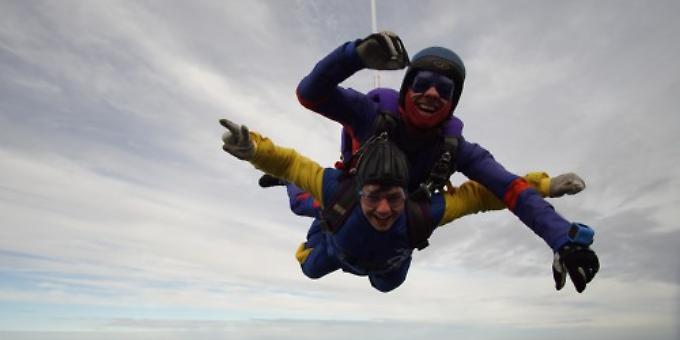 JOSH GIBSON, a 24-year-old physicist who now lives in London, is quite rightly grinning from ear-to-ear as he realises his dream of skydiving over the Grand Canyon.

The ex-Durham University student tore his anterior cruciate ligament in his left knee whilst representing his university in a team rugby match and despite various attempts to return to this and other sports Josh found that despite rest and physiotherapy nothing was working.

He says: “I tried going back to rugby shortly after the injury and found I would aggravate my injury by turning corners and stopping sharply when running. As a result I had to give up rugby.

“Additionally I strained my knee a couple of times playing rounders so pulled out of lots of sports opportunities. I also struggled with hill walking when the ground was muddy as slipping would hurt my knee.

“Around the house I found I couldn’t kneel, squat fully or sit cross-legged without hurting my knee.”

After graduating he moved back to Cambridgeshire and changed hospitals but didn’t do anything about his knee for a few months.

He then eventually found Professor Ghoz, who arranged for him to have a number of scans to assess the damage in his knee before advising of a couple of possible options. James says: “I had a final consultation with Professor Ghoz before the operation and was able to bring my fiancée with me so that we were both able to understand the risks and potential limitations.

“The operation itself went smoothly and Mr Ghoz talked me through everything he had done along with providing me with detailed notes to take to my Physiotherapist and GP.” Now, 19 months on from the operation, and his knee feels “as good as new”.

Josh added: “As a testament to the improvement to my knee I have played football, mountain biked for the first time, hiked into the Grand Canyon and skydived!”

PILATES ABC Henley is running socially distanced hall sessions during the day and evening — why not ... [more]