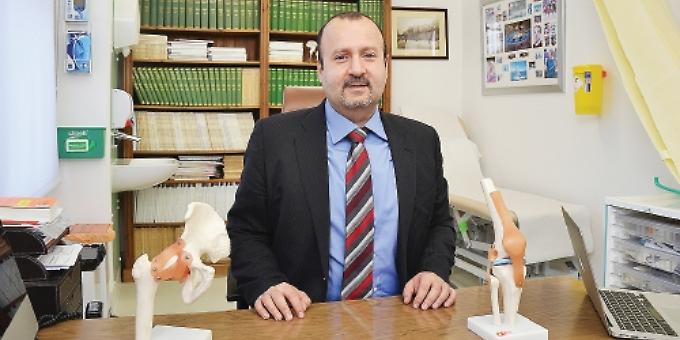 He is one of only barely a handful of top surgeons in the country who can offer computer-aided top-level precision surgery, which is actually more widely practised in the USA.

Professor Ghoz, who lives with his wife and children in Windsor, has clinics at the London Orthopaedic Clinic at 79 Wimpole Street, but he can also be found at the Spire Dunedin Hospital in Bath Road, Reading, and at the Berkshire Independent Hospital in Wensley Road, Reading.

Recently we have seen a number of patients receive life-changing surgery under the professional care of Professor Ghoz and his team.

Indeed, the professor hit the headlines last year when Jacqueline Baxter, a retired cleaner, had her leg saved by pioneering surgery.

Barry Humphries, a master stonemason and company director, was in considerable pain when he luckily researched and found Professor Ghoz.

Barry confirmed that after reading about the computer-aided surgery, the professor was his first and only choice. After three days in hospital, 75-year-old Barry made a full recovery and thoroughly recommends Professor Ghoz.

But it’s not just older patients who can dramatically benefit from Professor Ghoz’s surgical expertise.

Last month 24-year-old Josh Gibson had suffered a previous rugby injury and could no longer squat, sit cross-legged or hill walk. Josh was so pleased with his surgery that he sent Professor Ghoz’s team a photo of him now skydiving over the Grand Canyon!

Tilehurst resident John Smith, 73, another patient who was only too happy to be interviewed by us, had all but given up his beloved game of bowls after suffering a football injury some years ago. John couldn’t speak highly enough of the care given by Professor Ghoz and his team.

The precision surgery they offer is widely recognised for significantly reducing both pain and healing time.

Or for more information, call his PA Jenni Smith on 07858 32772 or email 2jennismith@gmail.com