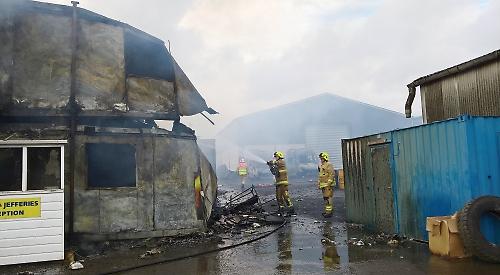 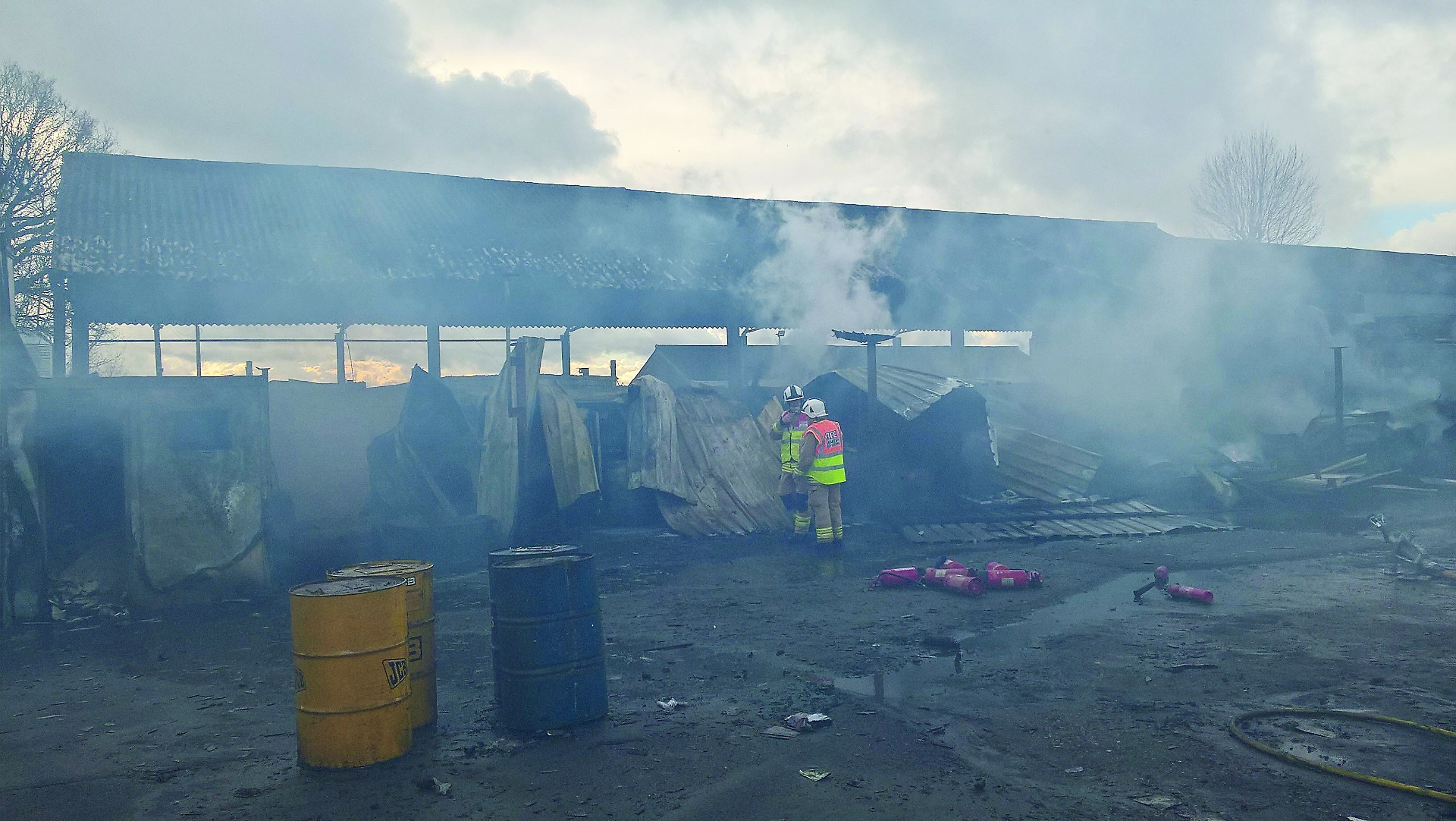 A BUSINESSMAN has thanked firefighters for saving his livelihood and home by putting out a massive blaze.

Richard Hazell, owner of tarmac firm Hazell & Jefferies, lost most of his business records in the fire at Mount Pleasant Farm in Whitchurch on Saturday.

It began when a diesel-fuelled generator caught fire and the flames quickly spread, destroying several office cabins, two support vans, a forklift truck, a large consignment of new tyres and thousands of pounds worth of computers.

Mr Hazell, who has run the Coombe End Lane farm for more than 35 years, also lost the documentation for his 600-strong herd of cows, which will cost him £12,000 to re-order.

However, fire crews were able to keep the flames at bay for half an hour while his staff cleared out a nearby barn which housed 13 of the company’s road maintenance lorries and steamrollers worth at least £700,000.

The firefighters also saved Mr Hazell’s house and several neighbouring chalets as well as a workshop containing machinery to maintain the lorries.

The blaze was spotted at about 10am by one of Mr Hazell’s technicians who raised the alarm.

His colleagues tackled the fire with extinguishers but they were beaten back by the heat and ferocity of the flames.

Three fire crews from Goring, Didcot and Reading were the first on the scene and called for back-up after discovering the fire had spread to a large tank of heating oil.

Firefighters wore breathing apparatus as the air was thick with fumes and the heat was so intense that it buckled the metal framework of the company’s main office.

Clouds of smoke could be seen billowing over surrounding fields from the main road through Whitchurch Hill.

At the peak of the incident, eight units and six specialist vehicles, including water carriers from Dorset and Wiltshire, were at the site.

The fire crews tackled the fire with water jets and diverted the run-off into pools so the oil would not pollute nearby rivers and streams.

Mr Hazell, who was on site when the fire broke out, said: “My mechanic came running out of the workshop, saying: ‘the generator’s on fire’.

“We’re fairly sure it had developed an electrical fault and that’s what started it.

“We called the fire brigade immediately and squirted
several extinguishers at the fire but it was still burning after we’d emptied them so there was nothing more we could do.

“There was a slight delay when the firefighters arrived because there wasn’t a hydrant close by but they acted as quickly as they could and did a marvellous job.

“It was a worrying time because we didn’t know how long the fire was going to burn, nor how far it would spread.

“It was absolutely raging and at one point it looked like it was never going to stop.

“Our cattle were housed on the other side of the barn and we kept a very close eye on the situation so that we could release them if they were in any danger, though it didn’t come to that.

“It was pretty devastating, although I’m hugely grateful that it wasn’t worse.

“Our insurers are sending the loss adjuster round soon but at this stage I can’t even think about putting a figure on it.

“We’re just very lucky not to have lost any of our plant.”

Mr Hazell’s staff are now working from his waste transfer station near Ewelme but are expected to return to temporary cabins at Mount Pleasant Farm within the next few days.

The fire-damaged buildings will be demolished once his insurers have inspected them.

Mr Hazell said: “We immediately started working on a plan to get ourselves back on track and were in meetings the whole weekend.

“My staff have worked very hard at salvaging whatever they can and I’ve managed to find back-ups of some computer records.

“Thanks to my team’s efforts we haven’t had to cancel any work.

“We’ve got lots going on in Sussex at the moment, including a big job which started on Monday as scheduled.

“We’re running at about half our usual capacity for now but it should be full steam ahead by next week. It’s still early days but we know where we’re going.”

Mr Hazell, who also owns the Sun Inn at Whitchurch Hill, added: “I would like to thank the firefighters for the marvellous job they did. I really can’t stress enough how grateful I am for all their help.

“They do an incredibly dangerous job and take a real risk when they tackle something like this.

“I’d also like to thank my neighbours, who’ve all been ringing with offers of help.

“An incident like this is never pleasant but it’s reassuring to know that people are there when you find yourself in trouble.”

Group manager Jason Crapper, of Oxfordshire Fire and Rescue Service, said: “This was a very severe fire and, although it has caused considerable damage, the nearby buildings were protected and the valuable plant and machinery they house have been saved.

“We work very closely with our Thames Valley Fire and Rescue Service partners and the benefits of this have been demonstrated in the way that we worked together seamlessly to tackle this incident.”