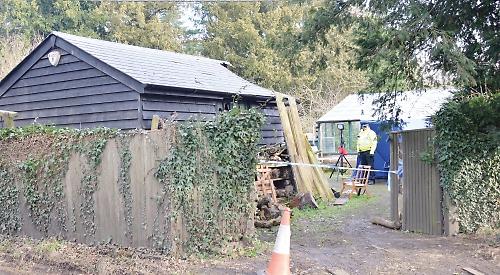 A MAN electrocuted himself while attempting a “dangerous” wood-burning technique in his garden workshop, an inquest heard.

Mark Sayer, 43, suffered a fatal 2,000-volt shock while using a high-voltage current to burn lightning-bolt patterns into a piece of wood with equipment he had built himself.

He then fell to the floor where his clothing was ignited by an electric heater, causing a fire.

A neighbour raised the alarm and six fire crews, police and paramedics, including the Thames Valley air ambulance, raced to his home in Gravel Hill, Henley, on February 27. Mr Sayer was pronounced dead at the scene.

The inquest at Oxford Coroner’s Court on Thursday last week heard that he was likely to have been killed when he made contact with the equipment, which included jump cables, crocodile clips and a microwave transformer.

Mr Sayer was the estate manager for the Badgemore estate and lived in a cottage in the grounds with his wife Jade and their two sons, Hudson, seven, and Mackenzie, four.

The inquest heard that Mrs Sayer had returned home at about 4.30pm after collecting the children from school when she noticed a “small plume of smoke” coming from near the shed.

Coroner Darren Salter said: “Her immediate thought was that it was coming from Mark’s workshop but she wasn’t immediately worried.

“He is an estate manager and would be out making things, burning things and soldering on a regular basis.”

After going inside, Mrs Sayer noticed the workshop alarm was going off and rushed to find her husband lying on the floor inside with his clothes on fire.

She grabbed hold of his shoulders to try to move him and received a “mild” shock.

She moved a jump lead close to Mr Sayer’s body with her foot and then put out the flames on his clothes with a bucket of water.

Mr Stewart and Mr Posgate tried to move Mr Sayer away from the shed but couldn’t do so, believing he might be trapped by debris.

Police and fire crews arrived on the scene and Mr Sayer was pronounced dead at about 5.15pm.

The workshop had suffered extensive fire and smoke damage and several of the roof tiles had fallen in.

DS Ben Henley, who investigated the incident, said he believed Mr Sayer may have been experimenting with a technique known as Lichtenberg wood burning, where an electric current is passed through wood to create patterns.

Keith Hammant, a friend, told police that he had suggested Mr Sayer try this as it was “up his street”.

The men had been “tinkering” with the technique and had watched instructional videos on the internet.

In order to create the current, a transformer is used to convert mains electricity into 2,000 volts or more.

Mr Sayer used a transformer attached to a work bench and two vehicle jump leads with crocodile clips on the end.

The post-mortem revealed that his cause of death was electrocution with the point of contact between the thumb and index finger on Mr Sayer’s right hand. There was no evidence that he was still alive when the fire started.

In a statement, DS Henley said: “I can’t be sure what occurred but upon reviewing all available material I’m of the opinion that Mr Sayer was in his workshop wood burning and came into contact with the equipment.

“He was electrocuted, which caused him to become unconscious or die instantly. He fell on the floor next to an electric heater and his clothes have become alight and subsequently caused a fire.”

“Due to the position of the cable we believe this to have been in use at the time of the fire.

“The electric heater was plugged in and energised at the time of the fire. This fire would have developed by consuming Mr Sayer’s clothing and spread to other items nearby. The burns sustained to Mr Sayer’s body indicate a low-level fire.

“From the neck up there were limited burns which indicate he had been in that position at the time of the fire.

“In my opinion the fire can be attributed to an accidental cause. I’m satisfied that it was most probably a fire igniting Mr Sayer’s clothing and he was incapacitated by some means, probably an electric shock.”

Mr Dunkley said the current produced by the equipment would have been about 300 milliamps, three times the amount needed to put the heart into fibrillation where it will beat 50 times per second.

“Electricity will try to find the closest path to earth — if that’s through you it will do that,” he said. “It would have passed through Mark’s hand, shoulder and body to his legs and where his heart is would have been on that path. It wouldn’t have been necessary to touch it but only to be in close proximity.”

The coroner heard that it was unclear whether Mr Sayer, who was married in 2003, was wearing his titanium wedding ring at the time of his death as it has not been recovered.

Mr Dunkley said that if it had been in his pocket it may have been dislodged during the fire and lost in the debris.

Recording a verdict of accidental death, Mr Salter said: “What’s clear is that the process itself is extremely dangerous with a risk of electrocution.

“It’s not something I imagine many people are engaged in apart from people keen on this type of craftwork.

“This does serve as a warning to people engaged in this or similar activities of what the risks are.”

More than 100 people attended Mr Sayer’s funeral at St Mary’s Church in Hart Street on March 22 with the procession led by a tractor carrying his coffin on a trailer.

His widow told mourners: “Mark, my wonderful, sweet, thoughtful husband. He has been so cruelly taken away from me and us and has left a huge Mark-shaped hole in all our lives. He was an amazing, creative, tender and loving man who had so many sides to him. I am all consumed by him and I love him so much.”