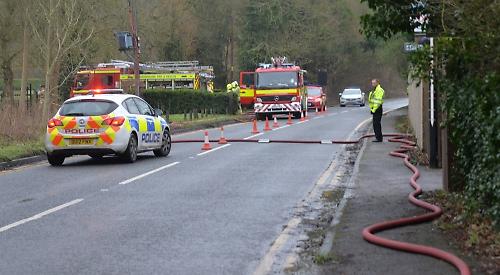 TWO dogs died after a fire ripped through a static caravan near Henley.

Firefighters were called to the scene after the prefabricated building caught fire in a field off Wargrave Road at about 10.45am.

Crews from Wargrave, Henley, Wallingford and Caversham Road all attended the incident, where no people were injured.

They used a hose reel to put out the fire and wore gas masks to protect them from the smoke.

Most of the building has been destroyed by the fire and firefighters were still dousing it down at 12.30pm.

Traffic is being controlled by police as it is down to a single lane and hose reels are running across the road.

A spokeswoman for the fire service said: “At 10.49am on Tuesday, January 23, Thames Valley Fire Control Service received reports of a static caravan on fire on Wargrave Road in Henley.

“Firefighters used a hose reel to extinguish the fire, but unfortunately, two dogs were found dead at the scene.”