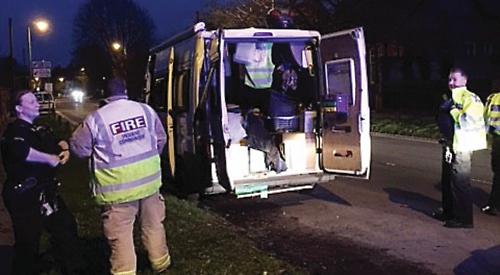 PARKING permits are needed on a main road into Henley to stop people living in vehicles on it, says a former town councillor.

Dylan Thomas raised concerns after people lived in a camper van in Northfield End, where he lives, for about a month.

He says the vehicle took up valuable parking space and the occupants caused litter problems.

Emergency services were called to the vehicle on Sunday evening for what was thought to be a fire but in fact smoke was from cooking.

Mr Thomas, a former Conservative councillor, raised the issue with his former colleagues.

He said: “I reported to our local councilors and town clerk over two weeks ago that the traveling community are now squatting along the A4130 because of the authorities’ long-standing failure to implement the long overdue parking regulations that residents have been calling for.

“Many local residents have reported this issue to the police, including that there was a fire hazard, only to be told that there is nothing the police could do because the camper van was parked legally.”

In 2016 about 70 people signed a petition calling for residents’ parking to be brought in.

Residents claimed their drives were being blocked by visitors parking there to avoid having to pay to park in the town centre.

Mr Thomas said: “We need residents’ parking, traffic-calming and traffic law enforcement and we need it now or more taxpaying residents of Henley will experience what we have.

“Thank goodness our law enforcement, paramedics and fire services are quick to respond and look after our welfare because our local councillors are as useful as chocolate fireguards.” Councillor Gawrysiak, Henley’s representative on Oxfordshire County Council, the highways authority, said he supported residents’ parking in the area.

But the council’s current policy is to create no new schemes.

Cllr Gawrysiak said: “I am supportive of residents’ parking in the area but we have got to go through the processes with the council.

“The policy at the moment is no more residents’ parking in Oxfordshire. The council will only accept a request if it is attached to a current residential parking area. I am actively pursuing this and hope to have good news soon.”

A spokesman for the Oxfordshire Fire and Rescue Service said: “The call came in as a fire in a campervan at 7.50pm. However it turned out to be cooking fumes and not a fire.”