Couple’s garage goes up in flames 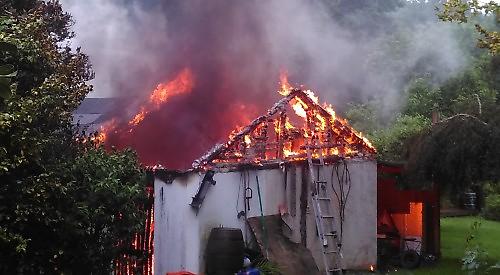 A SPORTS car, a bicycle and tools were destroyed when fire ripped through a garage at a house in Crazies Hill.

Fire crews from Henley, Maidenhead and Reading tackled the fire at Roger and Selina Avent’s home.

Flames could be seen shooting through the roof of the part-wood garage and workshop at the height of the blaze at about 9am on Wednesday, May 30.

The cause is believed to have been embers left over from welding equipment.

Owners Roger and Selina Avent were out at the time but the fire was spotted by neighbour Dave Smith, who raised the alarm.

Mr Avent, a telecommunications company director who had been playing tennis at the time, said: “A gardener working in a property with an elevated view saw smoke rising from the workshop a little after 9am but when it changed to flames Dave Smith called the emergency services.

“He had heard a number of small explosions as paint spray cans gave in. It is assumed that embers from doing some early morning welding smouldered on and eventually ignited the workbench.

“Once the fire progressed from the workshop into the garage the tarpaper roof produced red flames and black smoke to a considerable height.

“The firefighters did well to extract a propane cylinder early in the quenching process.”

The couple say that despite the loss of their belongings, it was lucky that no one was hurt and the fire did not spread to a neighbouring thatched cottage.

Mrs Avent said: “It was quite a shock to receive a phone call from an alert neighbour, telling us he had dialled 999 as our garage was ablaze.

“Just about everything in the workshop and garage was destroyed, including my tennis kit, walking boots and bike.

“We had far too much stuff in it and are now paying the price with a massive clean-up. I wish to convey our thanks to the fire crews. They were confronted by massive flames. Thanks to the firemen and firewoman, the flames were extinguished, leaving a smouldering heap of burnt and twisted metal.

“Since the fire I have been somewhat shellshocked. I seem to have lost my joie de vivre but on the bright side, no one was hurt.

“It’s hard for me but not Roger, who is so focused on buying new tools that he doesn’t seem to mind burnt metal littered everywhere. The worst offender is the burnt-out Porsche on the drive!”