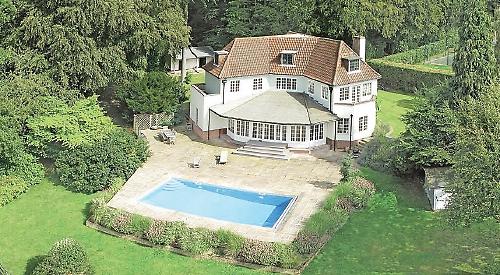 A REMOTE house owned by a billionaire financier has been destroyed in a fire.

Firefighters were called to the blaze at Greenfield, near Christmas Common, just before 9pm on Saturday. Crews battled through the night to bring the blaze under control but much of the three-storey house was reduced to rubble. No one was at home at the time.

The six-bedroom property is believed to be owned by Robert Agostinelli, 65, chairman of private equity firm Rhône Group, which has offices in New York and Mayfair.

It is set back from the road at the end of a long gravel driveway and firefighters had to be directed there by locals.

The alarm was raised after a large pall of black smoke was spotted by residents in neighbouring villages.

Ben Knight, 11, and his brother Charlie, nine, and their friend Susanna Mearns, 11, from Britwell Salome, were out looking for a missing tortoise when they saw the smoke.

The boys’ mother Claire alerted her husband Richard who tried to locate the fire with the help of neighbours.

The family called Susanna’s father John Mearns, who owns Red Lion Farm in Britwell Salome, who identified where the smoke was coming from.

Mrs Knight said: “We were aware that it’s pretty remote and firefighters were going to struggle to find it. My husband and I set off in different cars. He got there and located it and quickly phoned 999 using the postcode to direct the firefighters.”

A fire crew from Wallingford was the first on the scenc and was joined by eight more from Oxfordshire, Buckinghamshire and Berkshire. They used a hydrant at the nearby Tree Barn and two specialist water carriers.

Mrs Knight said: “It was a big fire — there were lots of flames. Had the children not spotted it all the surrounding woodland could have gone up in flames. The fire brigade were amazing and worked incredibly hard.” Ben who attends Moulsford Preparatory School, said: “The roof was falling in when we arrived and the whole house was literally burning up.

“It was quite scary because I didn’t know if there was anybody inside. The whole house was lit up with flames. The fire brigade asked us to go and find the nearest fire hydrant. We helped direct all the other fire engines.”

Charlie said: “We could see lots of flames and the fire was so big. There were so many fire trucks but they just couldn’t get enough water to it. Because it was so dry it might have spread further and people might have got killed. It was destroyed — you couldn’t repair that house quickly.”

Susanna, 11, who attends Cranford House School, said: “It was exciting when the fire brigade turned up but it was quite sad knowing that it was somebody’s house and that’s now gone.

“We were also worried that somebody was inside. It was very hot and it was really bright and scary. Neighbours started to gather when they heard the sirens. They were standing next to the fire hydrant, saying ‘Oh, my goodness, what’s going on?’”

Firefighters remained at the scene all night and on Sunday and part of Monday damping down.

Ben added: “We went and looked at the house on Sunday and there’s nothing left — everything is burned down so it’s very sad.”

Loss adjusters visited the property on Monday and demolition work has already begun.

The Oxfordshire Fire and Rescue Service said firefighters managed to save about 40 per cent of the property. The cause of the fire was being investigated.

Mr Agostinelli was granted planning permission in August to demolish the house and build a new one along with a replacement stables/groom’s accommodation, relocated tennis court and a new driveway. The plans included a wine room, gun room, cinema and gym. The existing house was built in the Thirties in an Arts and Crafts/Colonial style by the 4th Viscount Esher in brick, render and timber cladding.

Forbes has estimated Mr Agostinelli's net worth to be $1billion, ranking him as the 416th richest American.

The Henley Standard asked the Rhône Group for comment but did not receive a response.