Would-be recruits put to the test by firefighters 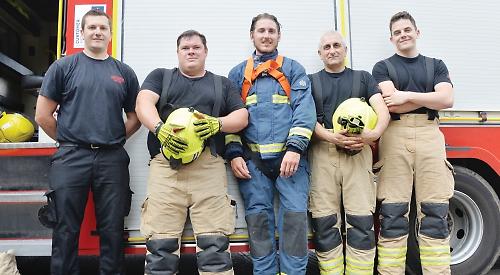 A “HAVE-A-GO” taster day was staged by firefighters at The Henley College’s campus in Deanfield Avenue.

Participants were invited to try out the skills required to become a firefighter, which included dragging a weighted dummy around an obstacle course and carrying and unwinding a hose reel while wearing full protective gear and a helmet.

They also had to climb a ladder propped up against the side of the main college building before locking their legs around an upper step and leaning backwards with their hands outstretched to prove they were capable of working at height.

One of the attendees showed an interest in joining the crew at Henley fire station in West Street and will attend weekly training sessions before an assessment by Oxfordshire Fire and Rescue Service.

The firefighters walked around the town centre during the day to raise awareness.

Watch manager Nick Windsor said: “We did get some interest so it was a worthwhile exercise. We’re very interested in hearing from anyone who would like to join us and would encourage them to get in touch.”

There are currently 13 on-call firefighters in Henley but they would like enough to fill at least two more weekday shifts and two at weekends.

For more information, visit the station at 6pm on Wednesdays or see https://www2.oxfordshire.gov.uk/cms/public-site/call-firefighters