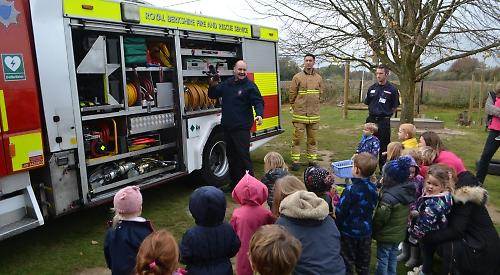 Four members of the crew made the trip and parked their fire engine in the playground.

Crew manager Jon Murby advised the children how to stay safe in the event of a fire and explained the firefighters’ equipment being modelled by James Rodgers.

The children were allowed in the vehicle and to turn on the blue flashing lights and use a hose.

The visit was organised by nursery worker Chez Annetts, whose father Tony was a watch manager at the station and who has has been campaigning to lift the threat of closure over Wargrave fire station in budget cuts.

Nursery owner Gwen Pragnell said: “Chez has done a lot of work with the fire station and as a thank-you they asked what she would like and she asked if they could bring a fire engine to the nursery. The children loved it.”

Pictured are firefighter Paul Clements showing the children some of the equipment on the engine and Jon Murby helping children with the hose.