Neighbour tackles fire in outbuilding with his hose 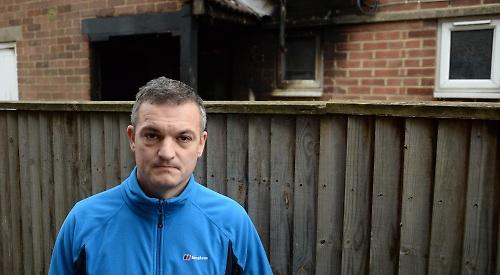 A MAN tackled a fire in an outbuilding at a neighbour’s house in Watlington.

Darren Lowman, 46, jumped over the fence and spent about 20 minutes tackling the flames with his hosepipe before firefighters arrived.

He prevented the blaze spreading to the semi-detached house in Love Lane, where a woman lives with her three children.

The cause of the fire is thought to have been a tumble dryer in use in the outbuilding on Friday evening.

Mr Lowman, whose father died from a heart attack after an almost identical incident three years ago, was at home with his wife and two teenage sons when there was a knock on their door.

He said: “My neighbour and her three kids were all crying and said, ‘our house is on fire’.

“I said, ‘bring the kids inside’ and had a look out the back door. I saw the flames and thought ‘that’s pretty serious’ and said to my wife, ‘call the fire brigade’. The flames were a good 20ft high.

“I connected up my hosepipe and jumped over the fence. My son Oliver passed the hosepipe over to me and I put it through a hole in the door.

“It wasn’t enough so then I got down low and opened the door and I was able to start tackling it. It was a case of needing to act immediately.

“I thought, ‘it’s going to get significantly worse if I don’t do anything’.

“I was there for about 15 or 20 minutes and by the time the fire brigade came all the flames were under control. I let them take over.”

Four fire crews attended and firefighters wearing breathing apparatus went into the outbuilding and extinguished the fire using a high-pressure hose reel. Mr Lowman, an IT project manager, said the windows of the outbuilding were shattered and there was smoke damage both inside and out as well as inside a toilet in the house where the buildings are attached.

He added: “If I hadn’t done what I did, I think the whole house would have gone up.

“We were quite calm about the situation and didn’t panic and made sure the family were made safe and comfortable.

“Neighbours across the road came to make sure people were all right and offered to put the kids up and everyone rallied around.”

Mr Lowman said the family were unable to go back inside their home that evening and are believed to have stayed with relatives but they returned the next day.

He said: “When I saw her the next day I said, ‘the main thing is you’re all right’.

“The downstairs toilet is a bit black but, generally speaking, the house is all right. I think they were quite lucky really.” Mr Lowman’s father Stephen died after suffering a heart attack while helping tackle a fire at a neighbour’s home in Lambourn, Berkshire, in 2016.

He said: “My dad did the same thing — got the hose pipe and then had a heart attack and died.

“There are similarities, I guess. I’m all right, but my dad wasn’t. It does make you wonder.”

Fire crew manager Nathan Morris said: “Quick thinking and swift action from the occupier upon discovery of the fire allowed them to evacuate their family and call 999.

“This incident highlights the importance of cleaning out filters within appliances regularly and avoiding using them while you are asleep or out of the house.

“I’m pleased to say that the occupiers had working smoke detection in the house which would have alerted them to the fire if the smoke had entered the house.”