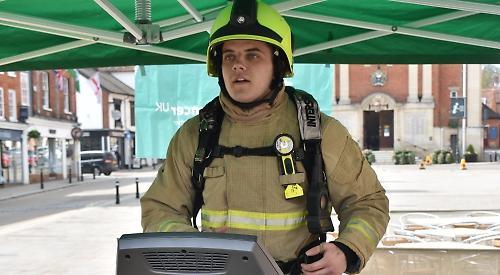 FIREFIGHTERS from Henley
completed a 24-hour treadmill challenge for charity.

The 12 men ran the equivalent of 102 miles between them during the challenge, which took place in Market Place from 1pm on Friday.

They wore full kit and breathing apparatus to make it as hard as possible and the treadmill was set to a three per cent incline.

Each fireighter spent up to an hour on the treadmill, which was beneath a gazebo, before swapping. They raised £2,808.47 for the Firefighters Charity and Bowel Cancer UK, which they chose as a beneficiary because their group manager Guy Dunkley has the disease and April is Bowel Cancer Awareness Month.

Firefighter Jack Staines, 20, who was the first to go, said: “It was really good — a bit hot and sweaty but all for a good cause. Paul Herrington, who is watch manager at the fire station in West Street, said: “It was hard work but enjoyable. We started off doing one hour at a time but during the night we did half an hour or 20 minutes to keep it going and not get too tired as it was freezing. It was nice to keep moving and stay warm.”

Nick Middleton, who is currently training for the London Marathon, ran 9.5km from 6am on Saturday. The other firefighters were Michael Saunders, Andy Gosby, Matt Prior, Nick Shuttleworth, Bryn Gedney, Jason Evans, Ian Birch, Harry Lacey and Sue Heathfield, the service’s systems administrator in Kidlington.

Four crew members from Goring fire station were present in as a back-up in case the Henley crew received an emergency call.

A stall was set up next to the gazebo so people could make donations or buy mini fire trucks and plastic firefighter helmets for children.