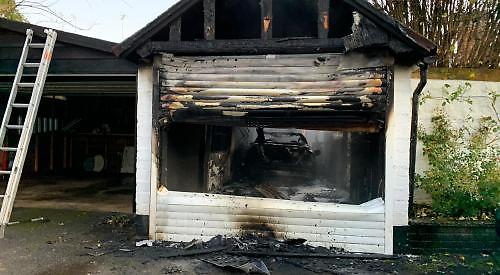 A CAR was destroyed when fire ripped through two garages and a shed in Northfield End, Henley, today (Friday).

Smoke could be seen billowing from the rooves as four fire engines tackled the blaze, which broke out at about 3pm.

The cause of the fire is not yet known but is believed to have started following an explosion in one of the garages before it spread.

A mercedes car that was parked in the garage where the fire started was gutted.

The fire slightly damaged a window of the neighbouring house and melted a drain pipe.

Mark Jones, station manager at Dee Road in Caversham, said: "The fire is believed to have started in one garage before spreading to a second garage and a shed.

"We can't confirm the cause of the fire at this stage as we are now going to pull the roof down and cut back its tiles to make sure the fire has been extinguished.

"The occupants of the house are aware of what has happened and we are working with them."

For the full story and pictures, pick up a copy of next week’s Henley Standard.