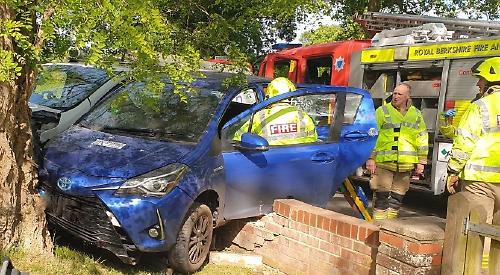 A CAR and a van collided at an accident blackspot and then crashed through the garden wall of a house.

The accident happened at the crossroads of Emmer Green Road, Sonning Common Road and Harpsden Road, near Binfield Heath, at about 3pm on Friday.

All three emergency services were called to the scene after the the blue Toyota and the BT Openreach van left the road and crashed through the brick wall of Chapel Cottage.

A woman was released from one of the vehicles by a fire crew before being treated by paramedics.

This was the third crash at the junction in the last year alone and locals have called for safety improvements.

However, inspections by engineers from Oxfordshire County Council, the highways authority, have deemed that the road markings, signage and visibility are sufficient. Now a Binfield Heath parish councillor and the village’s representative on the county council says he wants more to be done.

David Bartholomew said: “There is an ongoing history of accidents here and some years back there was a fatality.

“There were some improvements made and it calmed down but in recent years there have been more accidents again.

“I got the county council highways engineers and road safety people to look at it in detail and we had the signage cleaned and the lines refreshed and the visibility angles checked and it passed all the tests.

“In the last year, there have been three crashes there and I have asked them to go back again and have another look.

“The signage is compliant but for unexplained reasons accidents keep happening there.  There now seems to be a crash here every two months and it is not a situation that I want to continue.

“If it carries on like this, it is only a matter of time before something more serious happens. It has got to be resolved. We can’t just say we have ticked all the boxes. We have to do something to stop this from happening again.

“In recent years there have not been any serious injuries that I am aware of but that means the accident records don’t count.

“The police only put accidents involving serious injuries into their database so they go unrecorded, which is regrettable, but I am determined to do something about it.

“It is certainly driver error but that is not a satisfactory answer if the accidents keep happening and we need to increase the warning levels for drivers.

“I am going to discuss with the engineers what we can do.

“We have a dilemma in rural areas because we don’t want to urbanise them by having to put multiple signs and flashing lights up as it generates complaints.”

Councillor Bartholomew said possible solutions could be repositioning the “Slow” signs, installing rumble strips and changing the colour of the tarmac to make it more distinctive.

Paul Rollason, chairman of Binfield Heath Parish Council, who drove past the scene about half an hour after the crash, said: “We cannot understand how this can happen.

“Ideally, we would like some input from drivers — or even witnesses if they were around at the time — to understand what the problem is so that we can recommend to highways what they can do to spare us all these accidents.

“The problem is that, unless there is an injury or a serious injury, the police don’t consider it a serious accident.

“We are just so lucky that nobody has been killed in the last two accidents. That is extraordinary considering the damage done to the cars.

“To me, the signage seems to be perfectly reasonable and we just can’t understand why these incidents are happening.”

Lis Ransom, vice-chairman of the council said: “We are very concerned about it because these things keep happening but nobody can work out why. There has got to be a common cause somewhere.

“I feel bad for the people in the cottage, who have spent money previously mending the wall.”