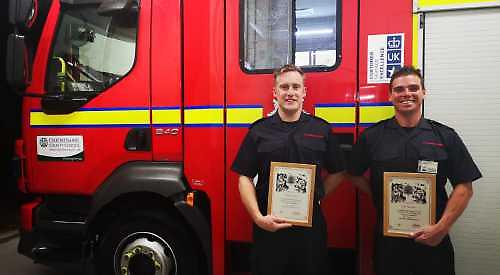 TWO members of the crew at Watlington fire station have been awarded length of service awards.

Both are retained, or part-time, firefighters, who have other jobs but are called upon when needed.

Mr Hawkins, 36, lives in Aylesbury with his partner Jennifer Blee, 34, an NHS nurse, and two children, Bella, six and Roscoe, three. He became a firefighter at the age of 21 after being recruited from his engineering job at Technical Moulding Project in Watlington.

He said: “At that time in my life it was a very exciting thing to do. You get to drive a fire truck on blue lights at the age of 21. I’m severely dyslexic so I was quite worried but as long as you tell your peers they really work well with you. They don’t make special allowances but they do help you out.”

Mr Lamb, 35, lives in Spring Lane, Watlington, with his wife Bonnie, 34, and son Woody, two. He became a firefighter after moving his 3D printing business from the Isle of Wight.

He said: “I wanted to get to know people and that was the main reason I joined. I also wanted to do something a little bit different.

“A group came round to my work fundraising and I got chatting to them and they said they could do with some help.”

He said he appreciated the support of his wife, adding: “I’m on call every other weekend and in the evenings so it’s difficult to make plans.” The fire station in Gorwell currently has six people, which doesn’t meet the requirements to be on call.

Mr Watkins said: “When I joined we got two or three calls a day but now with the pumps not being on the run, we get around one call a month. That means for calls in Watlington, you have to get help from other areas in Oxfordshire which can take up to 15 minutes longer. Every minute counts with this job.

“We are always looking to recruit more people — the difficultly is finding people who will be able to fit the job around their lifestyle.”