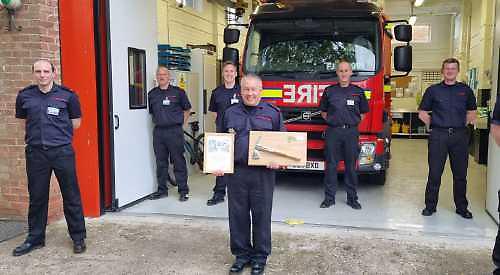 A MAN from Watlington who worked as an on-call firefighter for 20 years has retired.

Ashley Wingrove said that becoming a firefighter was his childhood ambition and that helping other people was the highlight of his career.

Mr Wingrove, 53, who lives in Watlington with his wife Samantha, said: “Helping other people was definitely the best thing about it, when they are having their worst time being able to help them is a privilege.”

He grew up in Chalgrove, went to school in Watlington and joined the fire service in 1997 when he used to work in Thame. He moved to the fire station in Gorwell two years later.

He said: “It’s something I always wanted to do and I was never able to do to it because I never lived in the right place as you have to be near the station to be able to respond quickly.

“When I was in Thame my company would allow me to respond to calls during working hours so that was great.

“Five years after joining Watlington I left to spend more time with my kids who were growing up but I then returned three-and-a-half years later. I always thought that if I could do it for 20 years, that would be enough and it has been a brilliant 20 years. It has given me the opportunity to do so many things I wouldn’t normally get to do.”

Mr Wingrove was presented with a certificate and commemorative axe to mark his retirement.

He said: “I decided to leave to have more time for myself. It’s a big commitment but you get so much out of it, it’s really a wonderful thing to do for your community.”

Mr Wingrove now trains new recruits in London to learn how to use breathing equipment. He said: “I think it’s important for people to understand that this is not a job only for men, there is space for everyone, you don’t have to be the big and ruddy firefighter.

“You need to be relatively fit and a good team player. Right now the fire station needs more recruits, they had a couple of people leave and are quite short on staff, we need to get more people in.”

For more information about how to become an on-call firefighter, visit www.oxfordshire.gov.uk/oncall
firefighters