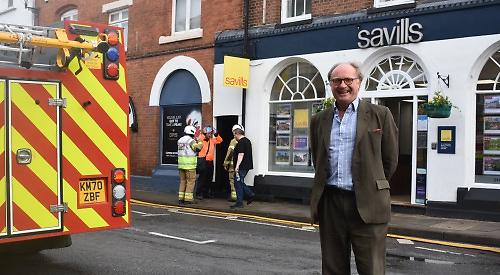 FIRE crews were called to Henley town centre after a suspected electrical fault in an office basement caused a burning smell.

A total of 25 firefighters from stations in Berkshire and Oxfordshire attended the incident at Savills estate agents in Bell Street at about 11.30am on Tuesday. Staff said they could smell burning and saw smoke coming from the basement so they evacuated the building and called the fire brigade.

Five fire engines, a fire truck and two police cars arrived at the scene and the area was cordoned off, which led to traffic queues as far as Reading Road and Duke Street.

Six Savills staff were working in the office when the drama began and they stood outside as the firefighters went in to investigate.

Stephen Christie-Miller, head of the office, said: “We were all walking around trying to figure out if the smell was one of us but it was coming from the basement and there was smoke coming out too. The firefighters think an electrical wire coming into the building was smouldering onto some paper. When you see five fire engines show up, it’s pretty impressive.”

Andy Ford, a station manager, said the firefighters made sure the building was safe.

After an hour the firefighters moved their vehicles to one side of the road to ease the traffic build-up.