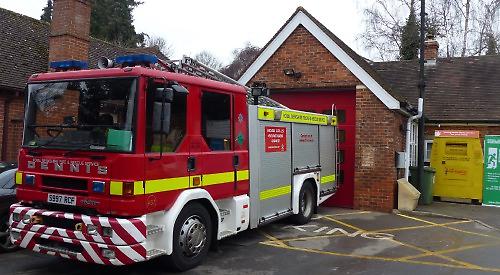 THE old fire station in Wargrave could be demolished to make way for retirement flats.

Wargrave Housing Association bought the building in Victoria Road in October. It already owned the Elizabeth Court retirement complex in the same street.

Now it hopes to replace the fire station with nine one-bedroom flats to supplement the 46 flats at Elizabeth Court. It has not yet submitted a planning application.

The Royal Berkshire Fire Authority decided to close the fire station in July 2020 as part of a cost-cutting exercise designed to make up for a budget shortfall of £284,000.

When the housing association bought it, it offered the building for use to the neighbouring GP surgery, which it also owns, but the doctors decided they were happy with their existing facilities and didn’t need to expand.

Andy Ferguson, chairman of the association, said: “All our ideas depend on planning permission. We hope to demolish and develop.

“Ideally, we would like nine new flats. All would have their own parking space and electric charging point. Elizabeth Court is a great place to live and we want to make it even better.

“This is an exciting time in the development of Elizabeth Court and the management committee wants to build further on the work of the founding committee more than 50 years ago.

“Given that people’s expectations have changed since the Sixties, we are also looking to upgrade several existing studios to become one-
bedroom flats.

“In a recent survey of tenants, 96 per cent said living at Elizabeth Court had met their expectations, while 100 per cent would recommend it to a prospective tenant.

“We want to continue to maintain these satisfaction levels and to take action on things that the tenants would like to see improved.

“Throughout 2022 we will be working with architects and planners to create attractive affordable accommodation that will serve the community.

“Our architect has investigated whether balconies can be added to the current flats and has confirmed it would be impracticable owing to building’s age and design.

“Juliet balconies would require new inward-opening windows, reducing the available space in the flats, which raises health and safety
concerns.

“It would be good to have more parking spaces. At the moment it is on a first come first serve basis and we have only 15 spaces.

“The facility was built in the Seventies when there were fewer residents with cars.”

Signs have been erected to notify people that Elizabeth Court is private land.

This is in response to complaints about youths skateboarding and cycling at the fire station site. Yellow lines will be installed to discourage parking there.

Mr Ferguson added: “The last two years have been difficult because of coronavirus and it is good that Elizabeth Court has managed cleanliness and safety throughout this period. This is thanks to the hard work and efforts of all our staff. In the short term we will recommend that visitors wear masks if appropriate and are mindful of the safety of others.”

Before it closed, the fire station was the oldest and smallest in Berkshire, having opened in 1903.

The fire authority first talked about closing it five years ago but the station was given several reprieves following a campaign to save it by residents and the parish council.

It was first recommended for closure in April 2017 but the decision was delayed by 12 months in order to give the fire crew time to improve their availability.

The decision was delayed for nine months in October 2018 and again in December last year for a period of six months as the general election was about to take place.

The decision to finally close the station came after the crew failed to achieve their availability target of 60 per cent.

In May 2020, the figure was only 2.8 per cent and the majority of incidents in Wargrave were dealt with by crews from elsewhere