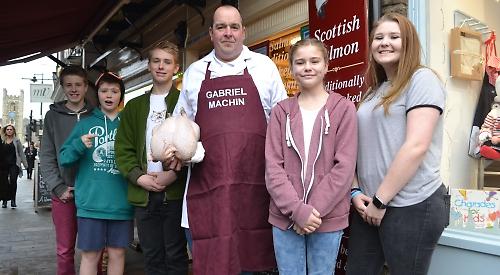 THE winner of this year’s Henley Standard Christmas turkey competition says she was relieved to win after forgetting to order a bird from the supermarket.

Dawn Cheesman, from Bix, had to cook for 11 people on Christmas Day so her prize of the 6kg turkey from Gabriel Machin butchers in Market Place, Henley, came in handy,

Mrs Cheesman and her husband Naunton have five children, Nico, 17, Kiri, 15, Dino, 14, Enzo, 12, and Starr, 11, and their lunch guests included her parents and her sister plus boyfriend — not forgetting the family’s great dane Blu.

Mrs Cheesman said: “I enter all the competitions in the Henley Standard but this was a good one to win. I tried to order a turkey from the supermarket but they had run out and I forgot about the competition so when I got the phone call to say I’d won it was great. ”

The turkey was supplied by Starveall Farm in Aylesbury.

The winner of this year’s Henley Standard Tesco Christmas hamper competition shared it with his daughter and grandchildren.

Brian Bloundele, 83, of St Mark’s Road, Henley, was delighted with his £75 prize which included wine, chocolate and a Christmas pudding.

He said: “I enter lots of Henley Standard competitions but don’t win many, so  it was amazing when I got the phone call.

“I was going to my daughter Amelia in Maidenhead for Christmas and was thinking what to buy her before I won the hamper.

“My grandsons were also going to be there so I will share it, especially the wine as I don’t drink!”

She shared the £100 worth of goodies including cake, biscuits, chocolate, wine and Prosecco with colleagues in the pharmacy at the Royal Berkshire Hospital on Friday, which was her last day at work before Christmas.

Mrs Wheeler said: “My parents Roger and Tina live in Nettlebed and I like to keep up with the news in Henley.

“My mother is an avid reader and enters all the competitions and tells me to enter as well. Now I’ve ended up winning!”