When it comes to lobster, 'alive and clicking' is the way to go 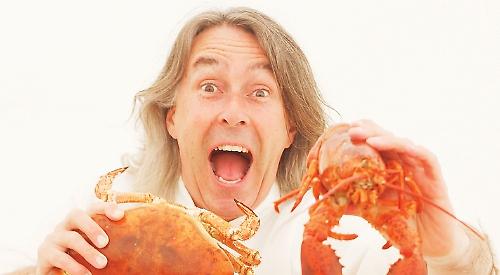 I DON’T know what all the fuss is about lobster. It’s hardly the lobster’s fault it’s so expensive — four times the price of crab. But four times as good?

You can’t deny that sweet-tasting lobster meat is simply delicious.

Some of our supermarkets offer little frozen lobsters at around £5.99 but frankly they’d be more at home in a pixie’s lunchbox.

And frozen lobster meat loses something — gone is the taste of the sea, the tang of the salty air. They can be rubbery, too.

Lobster is at its best purchased alive and clicking after being caught in a lobster pot.

Go and see the boys at Machin’s in Falaise Square who will order you one. Otherwise take a trip to Reading and go to Frost’s in Smelly Alley (aka Union Street) or O’Driscoll’s in St Leonard’s Road, Windsor.

Sold alive, you know they are fresh. Good, meaty lobsters should feel heavy and should have a fight in them. That’s why they have the rubber bands on their claws — they’d have your finger off otherwise! And those bands are put on as soon as they are put in the vivarium (lobster tank).

Put two lobsters in a tank and one will eat the other — unless they fancy one another and then they’ll mate and then the female eats her fella and then the babies.

When it comes to cooking lobster it’s a controversial kitchen kerfuffle — and foodies are divided on the ethics of it. You boil them alive, stun them in the freezer for an hour or two until they are comatose. Then it’s seven minutes in the pot of boiling water.

When cooked, remove and crack the claws and pick out the sweet, creamy claw meat. Then split the tail in half — scissors will do — and remove the intestinal vein and lobster’s tomalley, the soft, green substance found in the body cavity of lobsters. You only want the white meat.

Unless you fancy yourself as a Michelin star in the kitchen, eat your lobster “simple” — just cooked, still warm, with butter and Jersey Royals.

We run a lobster festival at the Crooked Billet. Should any of you fancy a free lobster masterclass with me, drop an email to paulclerehugh@
thecrookedbillet.co.uk

Come and prep a few crustacea!

We waste nothing of the precious lobster in our class and in our kitchen. I’ll show you how to turn the bones into stock, the crowning glory of soups and bisque — silky as a gigolo’s compliment, fishy as a chancellor’s promise.

Or how to turn the bones into a coral pink fragrant lobster oil, by roasting the smashed shell with aromats and vegetables then allowing to cool real slow in beautiful olive oil before straining and bottling it.

If the thought of ordering, collecting, boiling, cracking and preparing your lobster bores you to submission or leaves you looking more like a cooked lobster than a cooked lobster does, plenty of restaurants have it on their menu.

Ryan and Liam at Orwells in Shiplake offer it with chips (and it’s actually on the menu as Lobster Come Rain or Shine) — or try their more gastronomic twist.

Loch Fyne in Falaise Square have lobster in their seafood platter. Villa Marina have lobster ravioli and on request will do lobster linguine.

Chef Steve Luscombe at the Golden Ball, Lower Assendon, will happily order you a lobster on request.

Meanwhile, the Spice Merchant on the riverside in Henley puts a delicious twist on lobster.

We are blessed with many great restaurants and foodie pubs in the area with chefs who want to please — don’t hesitate to ask the chef if they’d mind ordering and preparing you a lobster. I’m sure most of my colleagues would be delighted.

Every August at the Crooked Billet at Stoke Row, as part of our lobster festival, we offer a £20 lobster luncheon Monday to Friday.

We serve a selection of freshly prepared dishes including lobster Caesar salad, thermidor, grilled with garlic butter and skinny chips — indeed any recipe, salad or twist you request.

It’s all fully prepared, so there’s no mucking about with lobster crackers. It’s a good idea to book, too. Lobster lovers will be in heaven and lobster virgins will have a choice of how to start what will be a lifelong love affair.

As the late, great Spike Milligan famously put it...