'Noisy' jelly is hard to beat, but try this more grown-up version 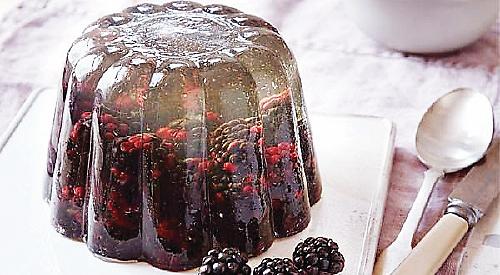 WHEN I was a kid the best jellies farted when you put a spoon into them. This caused much merriment in the Clerehugh household and at birthday parties.

Don’t fear — I am not regressing to my childhood!

In fact, the tadpole jelly is a proper grown-up dessert with berries suspended in English sparkling wine. (I’ll have the recipe for you later.)

And that’s what we’re talking about this week — the joys of English bubbles.

If I stand on the roof of the Crooked Billet I can just about see Barbara Laithwaite and her mates harvesting this year’s crop of Chardonnay, Pinot Noir and Pinot Meunier grapes which they use to make their award-wining Wyfold Brut and Rosé sparkling wine — amazing to think that each vine they hand-pick makes just one bottle of fizz.

Promoting local produce is common sense to any chef, so obviously Wyfold Brut and Rosé are on our list.

I took Barbara’s Wyfold fizz to our pop up restaurant at this year’s Henley Festival and it outsold the French stuff.

And I will defend English bubbly as rigorously as Admiral Nelson did against the French navy in the Battle of Trafalgar.

While, of course, French champagne is delightfully good, it was in fact a 17th century cider maker from Gloucester who first came up with the idea of fizz in a bottle.

Christopher Merrett not only devised the method of fermentation which gives champagne its sparkle, he sought out the strong bottles and closures which safeguarded the fizz.

The first champagne house was not founded in France until 1729 — almost 100 years after Merrett published his ideas.

So while méthode champenoise — a protected status meaning the last stage of fermentation is in the bottle — is sacred to the French (though now the EU definition is Champagne method or méthode classique), the English techniques are exactly the same in every detail.

The skills are in, as always, starting with good, healthy grapes — and the blending and ageing processes.

All Barbara’s Wyfold Brut vintages are international medal winners with classic, clean mineral flavours (from the flinty soil) and good acid which is essential in quality sparkling wine. The 2013 vintage arrives at the Crooked Billet soon and has a lovely creamy mousse.

Her 2014 Rosé is a richer, rounded wine with a lovely, pale colour but carries to the same crisp finish.

Sparkling wine is best served in a tulip glass (where the widest point is near the top of the glass, rather than in the middle) or flute — but remember those coupe glasses that also doubled as Babycham glasses for Aunty Maud when she had finished the bottle of Warninks Advocaat?

Came out of the sideboard at Christmas and had to be rinsed of dust before using?

Well, one story has it that the shape of the coupe is meant to be a replica of Marie Antoinette’s left breast. Think on that next time you sip from a coupe!

We also stock Fawley Vineyard’s delicious fizz (based near Henley). A one-hectare vineyard planted in 1985 where they grow Bacchus grapes for still and sparkling white wines.

My recipe for Tadpole Jelly is below and if, like me, you’re still a kid at heart, add extra gelatine and you’ll get a big fart.

l Paul Clerehugh is chef patron of the Crooked Billet, Stoke Row, and the London Street Brasserie, Reading. He presents the weekly Food on Friday show on BBC Radio Berkshire. Tune in at 2pm for light-hearted foodie chat, recipes and kitchen gossip.

WHAT I particularly like about champagne berry jelly is that it’s so light — the perfect third course.

An unwrapped summer pudding, which incidentally was originally referred to as hydropathic pudding because it had been dreamt up for the sick and infirm — a healthier alternative to the stodge-fest puds of the day.

A great dinner party dessert — prepared in advance, quick and easy to serve and a guaranteed crowd-pleaser.

At work I make it with local sparkling wine from Luxters’ Chiltern Valley vineyard, situated next door to Hambleden. It’s crisp, dry and elegant.

Good accompaniments to the jelly are crème fraîche, sorbet or a good thick homemade raspberry coulis.

Add a splash of Pimm’s, peeled diced cucumber and some sprigs of fresh mint to the following recipe for a “Pimm’s Royale” twist.

Arrange a strawberry layer, pour over a little more syrup to cover, set in the fridge for a few more minutes. Repeat the process with redcurrants.

Allow to set in the fridge for two hours. To turn jellies out, dip them briefly in hot water, lay a serving plate on top of each, turn it over, give the mould a short sharp shake and the jelly pops out.