Henley's not ready for a life of 'grime' 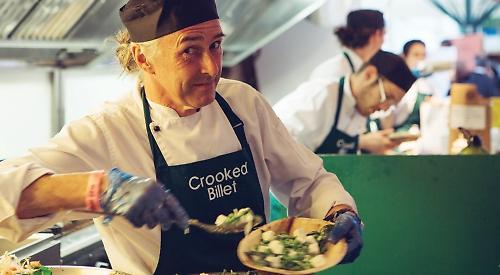 IT’S fascinating that the Reading Rock Festival, as we oldies know it — apparently it’s gone a bit “grime” this year — has a month to set up the site, build the stages, bring in the loos, fire up the generators and put in the red carpet and get the champagne on ice in the stars’ dressing rooms.

Meanwhile, the Henley Festival has just TWO days. Imagine building a huge stage, big enough for an orchestra, that floats on the Thames. Goodness, just the electrics — how the heck do they plug in enough juice to power Stoke Row floating on the river?

Okay, so a lot of the tents and infrastructure are nicked from the regatta. But 300,000 people use the regatta site before the festival moves in. Imagine the hoovering — would take me a year! The cleaning, the bottles! So 20,000 pints of Pimm’s, 4,500 empty fizz bottles, 10,000 empty wine bottles. If you’re in the mood you can help them by volunteering to litter-pick (and by the way, Reading Festival kids get £1 for every 10 cups or bottles they pick up).

I’ve been involved with the regatta and festival for many years and both teams are amazing — slick’s the word. But in my opinion — not that of your esteemed local organ the Henley Standard — the teams are about as helpful to each other as Mike Tyson giving up the best dressing room for Michael Spinks — whom he knocked out in 91 seconds, for those millennials among you who were not born then!

So, to the wonder that is Henley 2018. I am so excited to have been invited to bring the London Street Brasserie to the festival this year, joining my other restaurant the Crooked Billet. Two sites and two brilliant concepts — the former will be an amazing 200-seater jazz brasserie — fortunately with a blinking big kitchen! — and on the menu there will be a full range of brasserie classics.

There’s an impressive wine bar in the jazz brasserie too and, what’s more, you can book a table.

Each night the coolest, grooviest and most entertaining and acclaimed musicians will perform for you. Ray Gelato and the Giants are among the cream of the crop, to say nothing of Henley’s own smooth and sensuous Purdy, aka Rebecca Poole, a real feast with King Pleasure and the Biscuit Boys, and the Staks Band with a special guest.

The whole line-up at the festival is rocking it out. There are stacks of great comedians from Dom Holland to Jon Culshaw and Paul Merton and Richard Vranch.

And as well as the English National Orchestra, it’s cool they’ve booked bands that are top of the charts. Nile Rodgers had a Christmas hit with George Michael’s Fantasy while the delicious Rita Ora seems to own the charts at the moment.

Meanwhile, the rest of the festival’s restaurant scene is excellent this year. It’s almost as if Henley has its food festival back — just needs me, Antony Worrall Thompson, Angela Hartnett and a few of our narcissistic cheffy chums to do a few cookery demos.

The formidable Angela has actually put together the rather posh menu at the festival’s Riverside Restaurant with her usual Italian flair — though there are some very pretty English summery dishes too. Obviously my menu is better, methinks! Besides, I can’t do posh!

More formal eateries include the St James Restaurant, the Riverside Canteen and the Terrace Restaurant. (Will chefs’ egos overtake the performers this year, and that includes the flamboyant Grace Jones? We’ll see!)

But you can graze at other outlets like Pizza Express’s pop-up or my brilliant friends from Henley Spice Merchant with their inspired contemporary Indian cuisine. As mentioned, my Crooked Billet will occupy its usual prime riverside spot serving a range of lush and seasonal dishes.

The Cooking Cooks Francesco and Alice will be selling their beautiful hand-crafted pasta. Snob Lobster and Audacious Crispy Squid return for another triumphant year with delicious ingredients for dishes you can eat on the hoof. And you can munch on gourmet burgers and prime cuts from BBQ Club too.

But what you will really want to do, methinks again, is book a table at my Brasserie @ The Jazz Club before it gets fully booked! We’re really going to be cooking in there — in more ways than one!

For more information visit www.brasseriejazzfest.com and for table reservations call 07379 244926.

• Paul Clerehugh is chef patron of the Crooked Billet, Stoke Row, and the London Street Brasserie, Reading. Catch his weekly Food on Friday show on BBC Radio Berkshire from 2pm to 3pm — tune in for recipes, foodie affairs and light-hearted kitchen chat.