‘What’s that when it’s at home?’ Chefs reveal their secret recipes 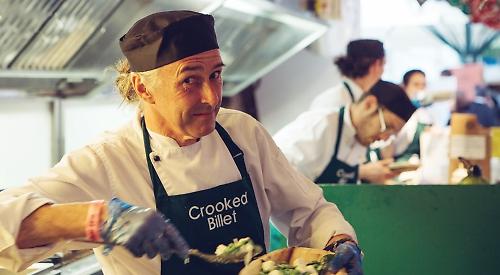 THERE’S a magical place in Henley where I expand my knowledge. How to make an origami (paper folding) frog, avoid rhubarb droop, treat bad breath, learn to bikini wax and read of sex, scandal and murder.

A sacred place, my little sanctuary, joy of joys — the independent non-chain Bell Bookshop on Bell Street. Having sold their first Penguin in 1966, they have been established for more than half a century.

Lose hours in a good bookshop. Find me thumbing through previously loved editions in the Duke Street Oxfam, daydreaming in Richard Way books on Friday Street, or Jonkers Rare Books in Hart Street.

Dinner party etiquette is to present your host with gladioli, a bottle of something decent and a little box from Gorvett & Stone. I prefer giving a book. Makes me look brainy, clever. Obviously not my own cookbook — even by the standards of my own egocentricity that would be beyond the pale. Wonder if AWT gives autographed copies.

The recently published Chefs at Home would make a wonderful dinner party gift instead of the usual bottle of wine. Besides, your carefully selected 2012 Chassagne-Montrachet will be squirrelled away, replaced with a New Zealand Sauvignon Blanc. You so wanted to taste that Chassagne-Montrachet, wallow in compliments by other dinner party guests on your exquisite taste and sommelier skills. Give a book.

Give Chefs at Home, which celebrates an eclectic mix of chefs, foodies and restaurants featuring dozens of recipes including some of my own.

Over the course of 100 pages there is beautiful photography detailing local and British gastronomy, from TV chefs, iconic restaurants, Great British foodies, favourite local eateries from Indian restaurants to Oxfordshire and Berkshire pubs — we boast some of the best in Great Britain.

Check out Michel Roux Jr’s Clafoutis aux Pruneaux (a delicious batter baked with prunes). This reminds me of when I was a boy — my grandma giving us Yorkshire pudding with jam on it before the Sunday roast… we’d eat less beef!

As the title hints, in Chefs at Home the Rouxs share recipes they cook for their families and friends at home. Stoke Row’s Crooked Billet shares its builder’s tea brûlée with chocolate hobnob secrets. A little further down the road at The Greyhound in Peppard, Anthony Worrall Thompson offers a mouth-watering tiger prawn and salmon ceviche — packed with zingy lime, lemon and chilli, fresh herby mint and coriander.

There’s a fascinating chapter on The French Horn, Sonning. Established by the Emmanuel family and overseen by Michael Emmanuel, who trained under French chef supremo Paul Bocuse.

Chefs at Home is rich in fascinating facts, stories and recipes from a host of others including Tom Kerridge, Nathan Outlaw, Shay Cooper and Mary Berry. Favourite restaurants including Soho Milsom; The Fire Station, Tooley Street; and Henley’s very own Villa Marina.

However. The most remarkable point of this excellent coffee table book, is that it is researched, written, compiled, published and distributed by girls from the Abbey School, Reading, as part of the worldwide enterprise scheme encouraging young entrepreneurs.

You can pick up a copy for £15 from the Bell Bookshop or online from the girls who created it via www.chefsathome-online.com

• Paul Clerehugh is chef patron of the Crooked Billet, Stoke Row, and the London Street Brasserie, Reading. Catch his weekly Food on Friday show on BBC Radio Berkshire from 2pm to 3pm — tune in for recipes, foodie affairs and light-hearted kitchen chat.