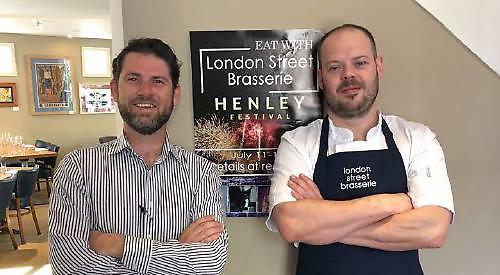 AMID the glitz and glamour of the Henley Festival, the plight of the homeless can seem a long way away.

But chef Paul Clerehugh is determined to make a difference at this year’s event as he is raising money for Reading homelessness charity Launchpad.

Staff from his London Street Brasserie in Reading are running a pop-up jazz tent and restaurant at the festival and donating £5 for each booking to the charity.

Paul says: “It’s a Victorian-style big tent where we are operating a restaurant with a mini version of our menu, a fun bar and a stage with lively jazz, soul and rhythm and blues music playing.

“We are very fond of Launchpad, which looks after genuinely homeless people.”

Last year, he helped raise £3,500 for the charity by donating a dinner for 20 people at The Blade in Reading as an auction prize at a ball.

He has been inspired by Louise Jackson, manager of his Crooked Billet restaurant in Stoke Row, which is also at the festival, after she raised £1,000 for Launchpad by running the Bracknell half marathon in May.

Mrs Jackson, who has suffered from asthma since she was a child, had originally planned to take part in the Reading half marathon in March but it was cancelled at the last minute due to snow.