There’s at least 1,001 reasons why the Trad floats my boat 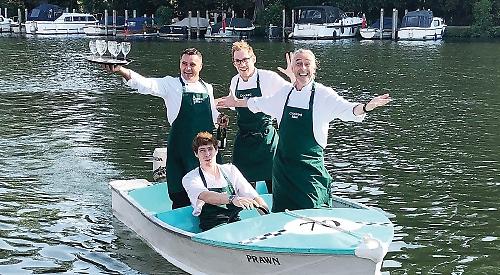 Like Black Forest gateau, duck a l’orange, coronation chicken lost its way. The principle is brilliant — cold chicken korma — but it lacks imagination and needs reinventing.

Why not marinate chicken breast slivers with garam masala, chilli and ginger before char-griddling? Swap apricot jam for fresh mango, add a crunch of Lebanese cucumber and spring onion. Exchange mayo with crème fraîche zinged up with lime zest, coriander and green chilli. I fancy constructing the ingredients Ottolenghi-style in layers instead of mixing everything up.

Constance Spry (a florist) and Cordon Bleu cook Rosemary Hume invented coronation chicken in 1953 for the Queen’s coronation. Served again for the Queen’s diamond jubilee on board the Queen’s row barge Gloriana. God, I hope she didn’t have to have it with couscous. Bet Gloriana has seen tonnes of curry mayonnaise chicken over the years.

My pub, the Crooked Billet, has been invited to cater for Gloriana at Henley’s Thames Traditional Boat Festival that runs from July 20-22.

Maybe I’ll do my coronation chicken twist — mustn’t get crème fraîche on the crushed velvet though. You can buy raffle tickets and come for a ride.

The Thames Traditional Boat Festival — call it the Trad — is a quintessentially British affair. Extrovertly wacky, astonishing, unique, fun. Like a river version of Danny Boyle’s Olympic opening ceremony. The Trad is quirky, crazy, mind-boggling and mad. With festival organiser the Duchess of Fawley, aka Lady McAlpine, at the helm, it’s guaranteed to be pretty Basil Brush.

This year marks the Trad’s 40th anniversary. Tens of thousands visited last year — the largest gathering of traditional river craft in the world.

Visitors can also see performances by a Hurricane and three triplanes — a search and rescue display with the Royal Marines.

On land there will be hundreds of vintage cars, commercials and bikes. Loads of shopping, art, clothing, jewellery, a garden, an entire street of antiques and bric-a-brac shops. A live music stage with great bands.

It’s a sort of mini Glastonbury-on-Thames with a Tetbury-sized antique market, a Portobello Road’s worth of clothes, jewellery and bric-a-brac, a vintage version of Chris Evans’s Carfest and the world’s largest gathering of traditional boats.

Peckish? The Trad’s cooking up a fabulously eclectic festival feast. I’ll be there in all my narcissistic glory with the Crooked Billet.

Then there are the cream teas, cakes and sandwiches from the Vintage Tea Rooms — doubtlessly lots of vicars and dog collars. Find a barbecue offering delicious smoked pulled pork.

My favourite part of the Trad is the Saturday night — bands playing, the Crooked Billet riverside restaurant packed with diners, the bar is crazy. At 10pm, take a seat on one of our vintage Lloyd Loom chairs, under the Henley moonlit sky and watch the illuminated boat parade drift majestically, gracefully past.

I’m cooking from an open plan canteen kitchen all day every day. Come and say hello.

There’s big boats and wee boats and all kind of craft, Puffers and Keel bowls and some with no raft, with the wind in your face there’s no finer place than messin’ about on the river.

For more information and to book tickets, visit www.tradboatfestival.com