Pizza chef delivers with oven on board old barge 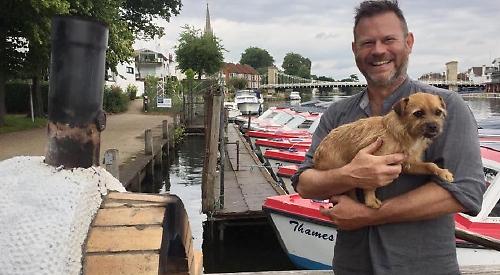 A MAN who built his own pizza oven on a barge so he could start a takeaway business says it has been a great success.

Justin Whelan makes and cooks the pizzas on board Muchroom Bargee to serve to customers in other boats and on the banks of the Thames in the summer.

He regularly visits Henley, mooring in Mill and Marsh Meadows to serve passers-by from the 57ft barge.

Mr Whelan lives on the boat, which he bought after becoming carer for his mother in Marlow as he couldn’t afford to move to the town.

He attended classes to learn how to build the oven and start his business, Pirate Pizza.

Mr Whelan, who used to live in Henley, says: “The idea was to float up and down the Thames selling pizza as I went. I’d been a chef many years previously.”

Although he now does all the cooking himself, he began last summer with the help of his friend Dan Maxwell and five-year-old daughter Emma.

He said: “Dan, who was widowed, had been a chef at a pub in Somerset so I invited him and his daughter to come and have a lovely time together going up and down the Thames.

“I thought it would be a nice change of scenery for them.”

Mr Whelan, who works as a chimney sweep in the winter, says his visits are weather dependent but he spends days at a time at various places along the river.

He says: “It has been a big success because it’s so niche. We’ve got a good chef’s oven, which gets really hot, and we use wood, which creates lovely smoke and makes the pizza taste
better.

“We have 247 five star reviews on our web page, which makes us one of the best in the area.”

He said: “It wasn’t my kind of music but we had a lot of trade from passing boats.”

Last summer, he was barred from trading in Marlow by Wycombe District Council because he didn’t have a permit.

But he was granted permission to operate in Henley over this summer by the town council as long as he paid a mooring fee.

“This is a guy who comes along and asks permission and has been really badly treated by our neighbours in Marlow.”

Councillor Sam Evans added: “It’s fine as long as we don’t create any more rubbish down there. I’ve heard that the pizzas are lovely.”