Butcher celebrates half a century of chopping meat 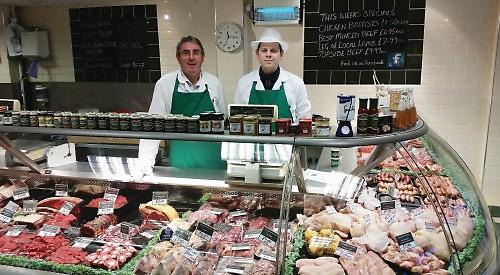 A MAN who helped transform a Henley butchers shop is celebrating half a century in the trade.

Terry Colby became a butcher in 1968 when he joined Gabriel Machin as an apprentice. He had left the Piggott School in Wargrave as a 15-year-old and would cycle from the village to the business in Market Place every morning.

The traditional fresh meat shop was owned by the Marett family and when Colin Marett, who later married Mr Colby’s sister Linda, took over in the Sixties the pair expanded it to include other produce such as fish and cheese.

Mr Colby, 65, with lives in Peppard Lane, Henley, with wife Jeanette, says he loved the work, despite not originally being sure that he wanted to be a butcher.

He said: “I don’t know if I did want to go in to it but I had six sisters and a brother so I had to go out in to the world and bring some money in.

“I was a Saturday boy at Jennings in Wargrave and because my sister was going out with the son of the owner of Gabriel Machin I became a Saturday boy there too. They then offered me a job and I found that I loved it. My brother-in-law took it over and together we developed it.

“I enjoyed learning the skills, there was so much to it. I learned from people who really knew what they were doing and I loved having the skills.

“My brother-in-law had lots of ideas and we changed the place. We added to the shop over the years, including fish which was a great success. People asked how I could stay all that time but I was helping create something, it was great.”

In 2006, Mr Colby was approached by a customer who wanted to start up his own farm shop in Stadhampton. He was also offered the chance to buy Gabriel Machin by Mr Marett but decided to take up the new opportunity after 38 years at the shop.

However, the venture did not work out and he left soon after to join a new farm shop in Wallingford. He worked there for six years before buying the business in 2015 and set up Wallingford Butchers with Tom Orpwood.

Mr Colby says he has served rock musicians and television stars during his time in the business and has watched the industry change over the past five decades.

He said: “Because of the area we are in I’ve served lots of celebrities. I once sold Rod Stewart a Christmas turkey. I was in the shop alone and when he was in there you could feel the atmosphere. We also used to have a lot of people filming things. Antony Worrall Thompson was in the shop a few times filming The Good Food Show.

“People used this type of shop much more in those days, supermarkets weren’t what they are now. Gabriel Machin was extremely busy, I can remember the queues out of the door on Fridays and Saturdays.

“With the high street suffering more people are going online now and we’ve added that too over the last six months. We use social media — if you can’t beat them, join them!”

Mr Colby marked the anniversary by recreating his daily commute from Wargrave to Henley.

“I wanted to do it again on Monday, which would have been exactly 50 years, but I was working so I went up on Sunday. We drove over and then I cycled back to Henley. It was a wonderful day and I had some friends who met me at home for a champagne brunch.

“I felt like I had to do it, it was a shame I couldn’t get in touch with the other two chaps.”

My Colby says he still enjoys the work and isn’t planning on hanging his apron up just yet.

He said: “I’m still passionate about it, I love the work and I’ve got more enthusiasm than anyone else in the shop. I’m up at 5.30am and I get home at 6.30pm.

“I’m planning on retiring by the time I’m 70, if it’s before then so be it but I really enjoy it and I love finding out new products.”