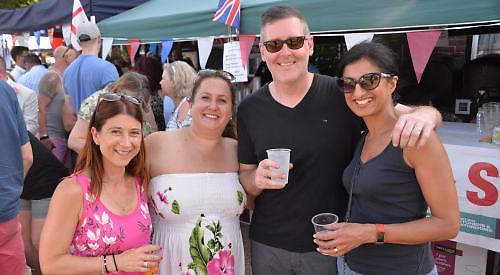 MORE than 1,200 people attended a music festival in Sonning Common on Saturday.

The third Big Bash festival took place at the Butcher’s Arms in Blounts Court Road from noon to 2am.

It was in aid of the British Heart Foundation and Rotherfield United Football Club in Gallowstree Common.

A DJ played Seventies Motown hits and visitors performed on the open mic stage in the car park.

Customers were served barbecue food and fish and chips and there was a cask ale and Pimm’s bar. There were treasure hunts, face-painting and bracelet-making for children.

Big Bash was started by landlord Rob Blues in memory of his wife Ellie, who died of cancer in July 2017, aged 46.

The couple, who had run the pub since February 2012, were together for 10 years and were married in 2013 but the following year Mrs Blues was diagnosed with liver cancer, which spread despite her having surgery and chemotherapy.

Mr Blues said: “It was a very good day and the biggest so far. My wife would have thought it was great. She knew about the first one and thought it was a great idea. It has become something that everyone looks forward to and I heard someone call it their ‘mini Glastonbury’ on Facebook the other day.

“Most people started arriving from 1pm and I was rushed off my feet. I got about 15 minutes to go out and listen to some of the music. The peak time was about five or six in the evening. A lot of people would come with their children and then in the evening parents would take their kids home then come back.

“Everyone was dancing the night away and there was a really good atmosphere.

“The music finished at 1am and the last revellers left at about 2am and we finally shut up at about 3am.

“People have already been asking me when it is happening next year. It has become the village event. We spent a week setting it up outside and I don’t think any of the organisers slept the night before.

Mr Blues thanked the 30 volunteers who helped, saying: “They were phenomenal.”

On Sunday he invited them to the pub for a curry to show his appreciation.