Get ready for gunpowder, treason, and Pete Lincoln 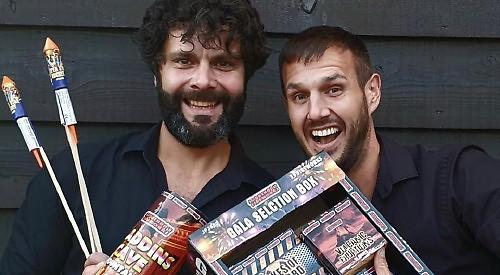 Season changed when the clocks went back last week, summer’s dying breath into autumn, winter and the Halloween-firework season.

Back in the day (when Valerie Singleton presented Blue Peter and Jenny Hanley Magpie) we didn’t have Halloween, and Bonfire Night was November 5 regardless of whether or not it was a school night.

Sue Ryder’s Spooktacular Fireworks Display was last Saturday, along with Twyford’s. But over at Thame they’re not lighting the blue touchpaper until next Saturday (November 9), when Chalfont St Giles will be holding it’s “Magic in the Sky” event.

Small neighbourhood bonfire nights are my favourite — that glorious edge of the amateur, risk and danger. Where Uncle Roy and Mr Braithwaite do the fireworks.

Burning a human effigy dressed in clothes your kids assumed you no longer want and it rains preciously when they do the fireworks.

Warm your soul around a fire of hedge trim and leylandii. Anoraks, chunky knits, balaclavas. Not “right on” health and safety glow-sticks but white hot sparklers.

No fancy pyrotechnics to music but a Robert Dyas firework selection box to a parents’ chorus of “Don’t touch the end of your sparkler.” Polystyrenes of Heinz tomato, floury baps, sausages and flap jack. Chip in a contribution towards the parish and its charities.

Like turkey at Christmas and candyfloss at the fair, there’s something intrinsically perfect about sausages on bonfire night.

My Northern DNA also loves parkin on Guy Fawkes’ — the original predecessor of sticky toffee pudding, also known as Thor, Thaft and Moggy up North (see recipe below). The fifth of November without sausages and parkin is like a kiss without tongue.

But let’s support those firework spectaculars the Rotarians, Round Tablers, Lions, Cadets and superstars organise, raising millions for charities.

Tonight (Friday) is the Cholsey Meadows bonfire with BBQ, mulled wine and hot chocolate. Tomorrow (Saturday) there is the Wallingford Kinecroft fireworks at the recreation ground with hot dogs, BBQ, soup, ale and mulled wine.

Then on Thursday, November 7, Reading Blue Coat School will be hosting its “pyromusical” fireworks display.

Meanwhile, here at the Crooked Billet in Stoke Row on November 5 and 6 (Tuesday and Wednesday) we have a music night.

Last year Pete Lincoln performed in Berlin to a live audience of one million — the show & firework spectacular simultaneously broadcast live on television as part of their New Year celebrations (you can find the footage on YouTube).

Favouring my preferred homely approach to the fifth of November, Pete will perform to an intimate crowd seated in our end dining room.

Watch, seated and warm through the restaurant windows an utterly mediocre firework display.

Waiters Simon and Pisti with their empty biscuit tin of fireworks guarantee something thoroughly amateur.

Pete Lincoln on the other hand is an outstanding vocalist, having starred with Seventies glamsters The Sweet (Blockbuster, Hell Raiser, The Ballroom Blitz).

Pete’s also one third of Frontmen with Peter Howarth from The Hollies and Mick Wilson from 10cc.

To make a table reservation for spectacular music, hopeless fireworks and parkin on November 5 or 6, call the Crooked Billet on (01491) 681048.

• Paul Clerehugh is chef patron of the Crooked Billet, Stoke Row, and the London Street Brasserie, Reading. Catch his Food on Friday show on BBC Radio Berkshire from 2pm to 3pm — tune in weekly for recipes, foodie affairs and an assortment of light-hearted kitchen chat.

PROBABLY the original sticky toffee pudding, parkin has its culinary roots in the North of England — they sometimes call it Thor in Derbyshire, occasionally Tharf in Yorkshire, and by the time you’re in Northumberland you may find it referred to as Moggy.

115g butter, plus a bit more for greasing

Preheat the oven to 180°C and grease a (preferably non-stick) loaf tin with butter. Sift the flour, bicarbonate of soda, spices and salt into a bowl. Stir in the oatmeal and sugar and make a well in the centre.

Melt the butter, syrup and treacle over a low heat, whisking to emulsify. Remove from the heat and let cool. When cooler, mix into the flour mixture with a wooden spoon, then beat the egg and milk together and stir into the mixture until well mixed.

Pour the mixture into the tin and bake for 45-50 minutes, leaving the mixture slightly soft to the touch.

Leave to cool for 30 minutes or so before turning out. Parkin is best kept a couple of days wrapped in a clean tea towel before eating.