Master chef has big laughs on the menu 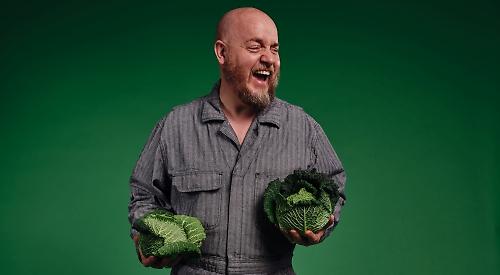 A STAND-UP comedian who cooks gourmet food live on stage is rustling up some tasty treats for his upcoming show at Norden Farm in Maidenhead.

George Egg is bringing his “Movable Feast” to the Altwood Road venue next Saturday (November 23) at 7.30pm.

During an hour of live cooking and laugh-out-loud comedy, he will show the audience how to cook with an engine, get the most from a car battery, and even utilise the air conditioning.

He’ll demonstrate ways to procure items from the train snack trolley, beat rip-off restaurant prices at the airport, and show how to turn unexpected roadworks into a picnic.

A Norden Farm spokesman said: “George Egg’s Movable Feast is cheeky, anarchic and creative — a multi-sensory show rich in humour and sprinkled with handy hacks. Three plates of gourmet food are cooked live in the most unconventional ways and with the opportunity to taste the results at the end, provided you can stop laughing.”

The critics agree, with the Metro newspaper calling the show “a triumph of out-of-the-box thinking” and The Scotsman hailing Egg as “a culinary Bill Bailey with chopping boards instead of keyboards”.

So where did Egg get the idea to combine comedy and cookery?

“From real life experience,” he says. “When I was performing on the comedy circuit I’d find myself in a hotel room after the gig hungry, awake, adrenaline-fuelled and perhaps a little mischievous, so I started seeing what I could cook with the appliances — the kettle, the trouser press, and so on.

“I came up with some smart recipes and made some videos of me doing it. They were well received so I turned those ideas into a show, my first one, called ‘Anarchist Cook’. Once I’d found my niche I stayed there and came up with my next show about cooking with tools, called ‘DIY Chef’. And now this third one set in a car — and on trains and planes and at roadworks too.”

Was there ever a plan B for his career if he hadn’t found his niche in that way?

“I suppose so. I was beginning to feel a little jaded by the comedy circuit, and while it was a great life going from comedy club to comedy club making people laugh — which I still do, of course — I felt an urge to do something more creative. I genuinely toyed with the idea of starting a food business, either a café or even a cookery school for kids, so I think if the comedy-food show thing hadn’t worked as it has I might have done that instead. Maybe I still will.”

What can the audience look forward to with this show?

“Laughs. Lots of them. Passion too. I’m really into doing this — both the making people laugh and the cooking and I think — I hope — that comes across on stage. They can also look forward to seeing real, proper cooking done live in front of their very eyes. And good cooking too. I assure you this isn’t a clowny gesture towards food with flour being chucked about just for the sake of it — this is real gourmet cooking.”

Who were his comedy influences growing up? “I’ve always loved Tommy Cooper, but then who doesn’t. Vic Reeves and Bob Mortimer when they first appeared on TV in the early Nineties were a real eye-opener. They made me realise that there’ll always be an audience for even the most outlandish nonsense.

“But my biggest influence isn’t a comedian but a chef — Gennaro Contaldo. He’s charming, charismatic and extremely funny. A natural clown. I had the honour of interviewing him recently for an episode of BBC Radio Four’s The Food Programme which was all about food and comedy and he was as lovely in real life as I’d hoped he’d be.”

Are there any celebrities he’d love to cook a meal for?

“Well, I’ve cooked for Jay Rayner, and Grace Dent, so they’re done. Gennaro would have to be up there — I think he’d enjoy my anarchic methods and he’d appreciate the good food. Jamie Oliver, too — I’ve got a hell of a lot of time for him. I think he works incredibly hard and despite years in the spotlight feels just as passionate and excited by things as ever.

“But I think I’ll settle for my mum. I realise I’m bending the rules as she’s not a celebrity, but she very sadly died earlier this year and she was the best audience both for cooking and for entertaining. She had a big laugh and big appetite and she only ever got to see my first cooking show, so if by some wave of a wand I could cook for her again then that would be magic.”

Egg has now played venues all over the UK, but is there anywhere he would really love to appear?

“Not especially,” he says. “I don’t have huge ambitions to play giant sell-out theatres. As long as it’s a reasonable-sized room and enough seats are occupied for it not to feel embarrassing and the audience are into it, then I’m happy doing my show anywhere. And frankly it works better if the room isn’t too big as it means everyone gets a good view, a good smell too, and the food goes further. I’ve done my shows throughout the UK from West End theatres in London to village halls in the Scottish Highlands and they’re all great in their own way.”

How does he like to relax after a show or in general?

“My shows are all about making your own food instead of buying it — to save money, to be creative and to be inventive. Metaphorically the shows are about repurposing, recycling, being resourceful, anarchic and sticking it to the norms, the corporations and the establishment, which is something you can assign to any aspect of life, not just food.

“Anyway, the real truth is that after doing a show I’m so exhausted from travelling there, setting up, doing the show and tidying up afterwards that I tend far too frequently to find myself in a
drive-through buying a double-cheeseburger. Ha ha.

“In general, and in all honesty, I relax by cooking. I could spend all day from the moment I wake to the moment I go to bed stood in front of a stove making food. I’m not so keen on washing up though.”

• Tickets for George Egg at Norden Farm are £14 with concessions available. The show is recommended for ages 14 and up. For more information and to book, visit www.nordenfarm.org

Q. With food and comedy such a winning combination on TV, would you like to appear on Bake Off or MasterChef?

A. I really would. I think at the moment I’m in that kind of hinterland between normal-member-of-the-public and well-known-enough-to-get-on-something-like-that status, so I kind of think I either have to get more well known to go on them, or less well known and then I could go on the regular one. That said, whenever something like I’m a Celebrity... or Strictly come on these days, I’m the one sat on the sofa saying “never heard of them”, so perhaps it wouldn’t’ matter.

Q. Do you have any memories of previous shows at Norden Farm?

A. I remember doing Norden Farm with my first show, and I had a bit where I talked about salt making ice colder, or making it freeze for longer, but the joke kind of was that I didn’t remember, or couldn’t be bothered to remember, the scientific reason why. Anyway, after the show a lady came up to me with her extremely clever son who described to me in scientific detail exactly why it worked like that. Lovely stuff.