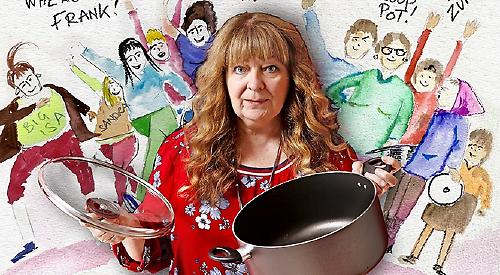 SHE’S been dubbed the “godmother of Scottish comedy” and numbers Billy Connolly among her fans.

Now Janey Godley is preparing to spread her appeal across the nation as this quintessentially Glaswegian comic takes her Soup Pot Tour over the border and down South — including a show at Norden Farm Centre for the Arts in Maidenhead on Friday, February 21, at 8pm.

“There will be a different demographic politically at these shows, but remember Nicola Sturgeon gets it in the neck from me as well,” says Janey.

“I will have to speak slower and make sure that it’s not all about just hating the Tories, though that will be difficult. But, by and large, people who come to stand-up are open-minded people — they tend not to be dyed-in-the-wool Brexiteers who hate the Scottish.”

This tour has Janey wielding a variety of talents, as she delivers the kind of forthright stand-up which has earned her a strong reputation on the comedy circuit and a loyal band of followers.

But she will also be displaying her skills at improv, as she stands by a screen and narrates ad-libbed voiceovers of people — many of whom are today’s crop of politicians — giving them a heavy Scottish accent and inventing a story, quite a few of which involve making soup for the community.

“The soup pot is very universal,” explains Janey. “If you’re in Australia, America, Brazil, France, Germany or Alaska, and someone dies or gets married, people will make soup. The soup pot is the hub of the community.

“When somebody died near us when I was a kid, somebody would make the big soup pot so all the visitors had something warm to drink and eat. It’s part of us all being in it together. Of course, that was before people discovered they were gluten-free and worried about being allergic to lentils.”

Janey first discovered that she could develop this new strand of her career on the night of the Scottish independence vote in 2014.

“I first did the voiceovers live at the Wild Cabaret club in Glasgow where the big screens were up. When the news came through and it was all looking a bit bleak, we turned the volume down and I started talking over the top of people. The audience loved it and I realised this was something I could do really well.”

She then poked fun online at the likes of Theresa May, Ruth Davidson and Nicola Sturgeon, replacing their talk of policy and elections with chat about Big Isa and her soup pots.

A recent piece she did on Kim Kardashian, largely mocking her for walking backwards, also went down spectacularly well, while clips of supermodels, Pathé newsreels and Fanny Craddock, the original celebrity chef, are given the Godley treatment.

“I started off doing it for me, really. I liked the fact that I could give those politicians a whole new background persona and the idea that they might have these ordinary conversations — I love the idea of that normalcy which cuts through all that bulls**t. The ones that are the hardest to do are of Katie Hopkins, because the audience just boo like they’re at a pantomime.”

Since the voiceovers took off, an unusual trend started which reminded Janey of the halcyon days of Spitting Image, when politicians would tune in avidly on a Sunday night, desperate to see if they had been captured in foam rubber and caricatured in song.

“MPs will say, ‘Are you going to do me?’ I’d like to do some international ones — I do Trump but I want to do Australian and Canadian politicians. There’s a lot of fodder to go on.” Recently, Janey has ramped up her acting CV, appearing in Wild Rose, a film about a young woman trying to make her way in the world of country music, and has written and directed a short film entitled The Last Mermaid.

But for now she’s enjoying making people laugh all over the country with both her no-holds barred stand-up and the unique nature of these new voiceovers.

“The most important thing is that this has never been done before — no other comic in the world is doing this. I’ve been doing stand-up for over 20 years but it took a Tory called Theresa to make me famous.”