Cook thrilled to win award for his tasty curry sauces 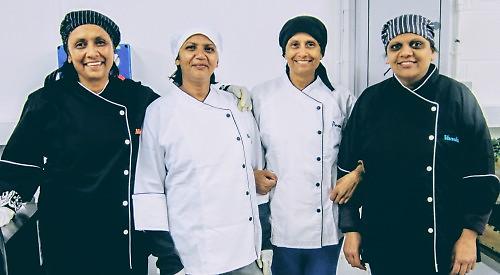 A COOK from Gallowstree Common is thrilled after two of his curry sauces won a national award.

It comes a year after he took over the Simply Honest Sauces company, which manufactures them.

Mr Felwick, 46, bought out the previous owners, four sisters who hail from the Gujarat region of India, when they thought about winding it down.

He was handed the recipes as part of the deal and now he primarily makes the sauces himself, although the sisters do help him occasionally.

Mr Felwick said: “When I discovered the sauces, I was obsessed with them instantly, I was eating a jar per week.

“Then, when the ladies told me they were thinking about stopping, I panicked and simply had to get involved.

“I now predominantly make the sauces and we use a 300-litre kettle to make them. We slow cook onions, chillies and grind up spices to go into the sauces. We then boil the sauces for a number of hours to pasteurise them.

“They are then put into the jars at 90 degrees and sealed in with a vacuum lid. It’s all natural ingredients with no added preservatives.”

Mr Felwick says the award as made him more confident about the company’s future.

“It’s fantastic for us,” he said. “Great Taste are recognised food awards so to have the sauces acknowledged by experts really is great.

“It gives me the confidence to talk about it more, especially when we are doing sauces that aren’t your staple curry sauces like a korma.”

Mr Felwick is married to Rachel and they have two children, Mabel, seven, and Arthur, five, who attend Kidmore End Primary School.

He said: “Rachel was part of team ‘eating the sauces’ before I got involved so we were both big fans. The kids enjoy the sauces as well, but they are a bit spicy, so we add some coconut milk into them.”

The sisters, Nisha Patel, from Brookwood, Shrila Amin and Maraulata Patel, from London, and Varsha Patel, who owns Westholme Stores in Goring with her husband Jack, launched the company about six years ago.

Mrs Amin had a shop in Fulham where she supplied fresh sauces and they were so popular the hobby became a brand, called Swaadish, which means “tasty”.

But the sisters decided they wanted more time away from the business so looked to sell it so it could expand.

Mrs Patel said: “The award is an amazing achievement and we all feel very proud that our sauces are well received. The hard work really pays off.”

Mr Felwick also has a food truck business selling different kinds of meatballs, although this has been restricted due to the coronavirus pandemic.

The Bowler Meatballs and Vegballs was set up in 2011 and has traded at Sundance Film Festival, Royal Ascot, BBC Good Food Shows and Glastonbury Festival. He has also served food for businesses such as Google, Spotify, Nike, Coca Cola as well as actor Robert Downey Jnr.

Mr Felwick said: “In the middle of lockdown, I started making fish and chips for Gallowstree Common and I’d WhatsApp my neighbours to come and get it when it was ready.

“We’d charge £6 and take £1 from each sale to serve fish and chips at local care homes.”

The Bowler has also been serving food at the Kidmore End Cricket Club in The Hamlet.

Mr Felwickdiscovered his love for cooking at university when he would compete with his housemates as to who could make the best baked bean dish.

He then went to Ballymaloe Cookery School in Shanagarry in Ireland, using the inheritance left to him by his grandmother to pay for it.

Mr Felwick says the pandemic has meant he can focus more on the sauces but he hopes both businesses can thrive in the future.

He said: “Our hopes at the moment are to just getting through the pandemic, focusing on online orders as much as we can.

“I am not sure when outdoor events will return.”