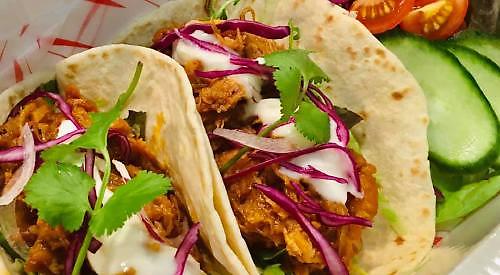 A PUB in Sonning Common is offering themed takeaway food during the second coronavirus lockdown.

The Bird in Hand in Peppard Road changes the menu each weekend so that customers get a taste of international cuisine, including American, Mexican and Italian.

Dan Wilson and his wife Helen Blundell, who own the pub, came up with the idea after all pubs and restaurants as well as non-essential shops were ordered to close for a month from November 5 to help stop the spread of covid-19.

They will be able to re-open on December 2 and are allowed to sell takeaway food in the meantime.

The couple decided not to offer takeaways during the first lockdown earlier this year as it went on for almost three months but felt able to do so this time as it is shorter.

Mr Wilson, 48, said: “The restrictions were harder during the first one and it was a longer amount of time. As this one is only a month we decided takeaways could be viable.

“We looked at what other people were doing but we wanted to offer something different every week.”

For the first weekend, the food theme was American with hot dogs, chicken wings and burgers.

Last weekend, it was Mexican with chilli con carne, enchiladas, nachos and tacos.

This weekend, the pub will be offering Italian food including mushroom arancini, beef ragu lasagne, spinach and cheese cannelloni and aubergine parmigiana.

For the final week the menu will consist of street food.

Mr Wilson said: “The American theme tied in nicely with the presidential election. We were very busy and had lots of local residents supporting us by ordering food.

“We had Mexican food last week and orders started coming in 10 minutes after we posted the menu online. We couldn’t believe that many people were thinking about Mexican food at 9am.

“It went really well. Saturday was by far the busiest day we’ve had so far and we had lots of great feedback on Facebook.

The couple, who usually offer traditional pub food like fish and chips and steak and ale pie, decided what the lockdown menus would be and take the orders.

The food is prepared by new head chef Luis Palacios, who used to work at Tom Kerridge’s Hand and Flowers pub in Marlow, which has two Michelin stars.

Mr Wilson said: “We plan the menu Tuesday and Wednesday and it goes live on Thursday and we start to take orders over the phone through calls or texts.

“It’s completely different for us but we soon got to grips with it and had a lot of orders.

“We calculate the price and then call customers back and they pay over the phone with a card.

“People pick their food up in 10-minute slots so we can control the flow of customers and no one is crossing paths and it doesn’t get too busy.

“It has gone smoothly so far but it’s different for us as we can’t check if people are happy with their food like we usually do because people just take the bag and leave.”

The pub’s other four staff, who have bar and kitchen roles, have been put on furlough.

Mr Wilson is also waiting to hear back from South Oxfordshire District Council on whether the pub is eligible for financial support for the Government.

Despite the popularity of the takeaways, the service will not continue when the pub re-opens when the restrictions are lifted.

Mr Wilson said: “As we have a small kitchen and a small team, carrying on with the takeaways would be quite difficult. We will go straight back to before with table service.

“We hope this area will stay in tier one as the pubs in tier two are struggling with the one household rule. The food side of the pub was picking up before the lockdown and people were getting used to coming back inside to eat.”

The Hare and Hounds in Woodlands Road, Sonning Common, is not offering takeaways, even though it did during the previous lockdown.

“It’s only for four weeks,” said landlord Mike Sugg, who runs the pub with his wife Claire.

“We wanted to focus on doing work outside so we are extending the patio and sorting out lighting, heating and decking. We are thinking ahead so we can survive.”

The Butcher’s Arms in Blounts Court Road and the Unicorn at Peppard Common are not doing takeaways either.