Pop-up food event is taste of what’s to come 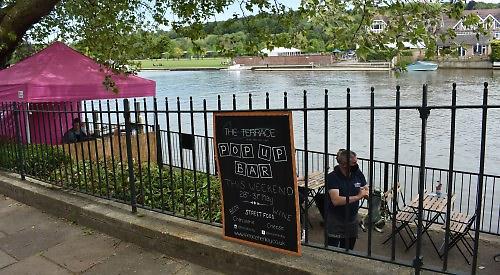 A POP-UP food event at Red Lion Lawn in Henley was officially opened by the Mayor.

A new company has taken over the contract to serve refreshments and offer pleasure boat trips from the paved riverside terrace downstream from Henley Bridge.

The Henley Boating Company, which is based in Wargrave, was awarded the contract by the town council, which owns the land.

The bank holiday weekend event, called The Terrace on the Red Lion Lawn, was run by company founder Jim Sneddon and Philippa Ratcliffe, who organises the Eat! Food Festival in Henley.

On sale were pinchos, charcuterie plates, cheese, olives and marinated mushrooms as well as drinks.

The Mayor Sarah Miller attended with her partner Carolyn Ahara and their daughters, Ruby and Vivien, 10. The family were also taken on a boat trip by Mr Sneddon to Marsh Lock and then towards Temple Island Meadows and back.

Councillor Miller said: “It was really lovely and the girls loved it — they were very excited.

“I think what they’re doing there is great. I know they have plans for the future and it’s all very community minded.

“It will be great for Henley. That stretch of river has been calling out for somebody to come in and bring it back to life and that’s exactly what Jim and the team have done.”

Mr Sneddon, an IT security consultant, who founded the business in 2018, said: “This was the second pop-up event we’ve done.

“The first was a month ago for us to get a feel for the area and how we could utilise it. We had lots of positive feedback. People said it was really lovely to see this area being used and that they couldn’t believe how big it was when you see the tables down here.

“It’s lovely to have the Mayor support us and to see the rest of the council have faith in us.”

Ms Ratcliffe said: “We’ve got a lot of different things planned. We want to get more involved with the river as it’s the life- blood of the town.

“We’re all ears for what people want. It’s about having fun as well as supporting everyone and utilising the space.”

The previous licence holder was Sam Gill, who owned the Red Lion Hotel, which was sold last year and is now being refurbished before
re-opening in the summer as the Relais Henley.