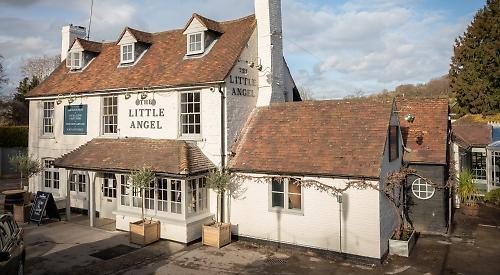 PUBS have been suffering from “no-show” diners since they re-opened in April.

Some are now asking customers to put down deposits when they book to discourage them from not turning up.

Landlords say the problem is hitting them in the pocket when they are trying to recover from losses caused by the coronavirus pandemic.

Mark Dunlop, who co-runs the Little Angel pub in Remenham Lane, Henley, said he had 28 people who had booked fail to turn up on the Sunday before last.

“We can’t afford that kind of loss,” he said. “It has always been an issue at weekends. People book two or three places and let their guests take their pick. We’re lucky that we get walk-ins.

“We’ve put a ‘no-show’ fee of £10 per person when people make bookings.

“This focuses customers on the seriousness of it and makes them commit to the booking.

“We have to get all restaurants, pubs and dining establishments to sort this. It’s a necessity given the year we’ve had.”

Mr Dunlop, who is also landlord of the Angel on the Bridge in Thames Side, will hold a booked table for 15 minutes.

He used to call customers at 10am to confirm their bookings but stopped because it took up a lot of time and people didn’t always respond.

He said: “It has been an issue for a long time but it’s even more acute now as we lost about a year of trade.

“We hope that people understand that we’re trying to employ people and catch up and get our bank accounts up to a good level.”

Peter Smart, assistant manager at the Argyll Pub in Market Place, Henley, said: “We’ve had plenty ‘no-shows’. It has been an issue since the pandemic and with the bad weather we’ve had.

“We’ve had up to about 50 people in one evening not turn up. We can have around 400 bookings a day so I can’t call everyone to double check.

“We turn people away and then people who have booked don’t show up and we lose a lot of money. It’s another challenge to deal with. It can be really devastating sometimes.”

Dan Wilson,  who helps run the Bird in Hand pub in Peppard Road, Sonning Common, said: “The first couple of weeks after
re-opening there were a lot of ‘no-shows’.

“There was a lot of excitement  to get out and there was probably some confusion with friend groups booking different places.

“That’s kind of sorted out now that people are getting more organised. There isn’t that mass panic to find a table now.”

He said bookings were important because the pub’s location meant it didn’t have the “luxury” of relying on walk-ins.

He said: “Now I ring round the day before or the morning of and that has had a huge impact.

“We would never want to take deposits so there’s not an awful lot we can do.

“People need to have an understanding of the impact that they will have on pubs and restaurants.

“The message is that even if you cancel the table two hours before it secures that table up for walk-ins.

“Everyone understands people’s circumstances change especially at the moment.” Joe Ball, general manager of The Bull on Bell Street, said there were a lot of “no-shows” when the pub re-opened in April.

He said: “I think everyone just panicked and booked places for every weekend and then forgot to cancel.

“There have been a few here and there since re-opening for indoor seating but there’s a lot less panic now as there is increased capacity again.”

Nick Willson, who runs the Flowing Spring in Playhatch with his wife Hazel Lucas, said they now take pre-orders for food when customers book which helped people commit to their bookings.

“It’s something we put in place during the pandemic for takeaways,” he said.

“It means the kitchen staff can prepare in advance rather than reacting when the orders come in and we know how many staff members we need.

“We used to take pre-payments for these orders but we stopped because it became too much to handle with the amount coming in.”

Nigel Rainbow, landlord of the Three Horseshoes pub in Reading Road, Henley, said “no-shows” had not been a big issue for him.

“On the whole it’s not too bad and I don’t think it has increased since re-opening.

“The way I run my pub I trust people. People book for a buffet and I know they will turn up.”

Last week, Antony Worral-Thompson, who runs the Greyhound in Peppard, called customers who fail to honour bookings “ignorant” and “mindless”.

He was speaking after 35 people with bookings failed to show up.