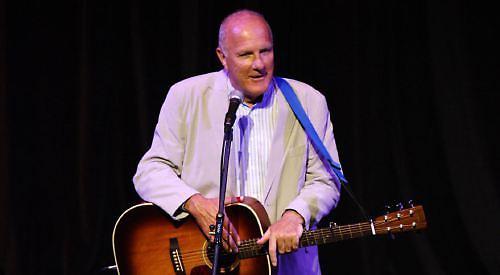 AFTER a long and at times frustrating year, veteran folk singer and comedian Richard Digance is looking forward to spending Christmas with his nearest and dearest.

“I’ve got my grandchildren now and I obviously haven’t seen a lot of them this year, so I think it will be a very family-orientated occasion,” he says. “But only if they’ve bought me expensive presents — otherwise I’m going home.”

Now 72, Digance has been in the entertainment business for more than half a century, making regular appearances on radio and television.

At the height of his fame in the late Eighties he received a BAFTA nomination for TV entertainer of the year.

Having started out as a singer-songwriter on the university folk circuit, he has continued to play a range of venues the length and breadth of the country.

On Tuesday, December 28, he is bringing his Christmas show to the Crooked Billet in Stoke Row.

The pub’s chef patron Paul Clerehugh said: “Many people sing, play guitar and tell stories but not many have supported Steve Martin and Robin Williams or played a guitar duet with Brian May of Queen. Richard Digance has.

“A rare performer, he’s respected by comedians for his original material and by musicians for being an accomplished guitarist.

“His loyal following confirms his wide appeal — from the younger generation attracted by the fact he has inspired many modern-day performers to the super-loyal who have followed him since the time he had his own ITV series.”

In normal times, Digance plays three shows a year at the Crooked Billet, but his last visit was at the end of June.

Prior to that, in October 2020, he had played his first live show since the start of lockdown at the Newlands Lane venue.

On both occasions he made a point of telling the audience how delighted he was to be standing in front of them again.

“This year has been okay compared to last year,” says Digance. “But it’s a bit like being a footballer — you’ve got to be match-fit. You can’t not work for 17 months and then just go and play the guitar like a maestro.

“It takes quite a bit of — I was going to say resurgence. I don’t think that’s quite the right word, but you’ve got to find yourself again as an adrenaline-led performer, which you don’t do during 17 months spent in your living room.”

Digance’s bread and butter these days is composing incidental soundtrack music for films and TV shows from the relative comfort of his home studio in Salisbury.

“I think the studio was a bit of a salvation for me through 2020,” he says. “It sounds dreadful but I was spending so much time in there I almost overdosed on it, you know?

“I mean, it’s a luxury to have your own recording studio but sometimes I used to go in there and I’d just think, well, what am I going to do today? I’d just stare at the wall and get the guitar out and it was really hard to keep the whole impetus going.”

The author of numerous books, including one called Father Christmas’s Journey for children, Digance also had his writing to fall back on.

This summer he released his second autobiography, A Life Well Lived, the follow-up to 1999’s
A Wealth of Comedy. He says: “The books are fine but they’re a subsidiary, to be honest.

“I am essentially a performer and that’s all I’ve ever been — all the other things I do are what I would call a bolt-on.

“And it’s all very well having
bolt-ons, which means I don’t have to drive a Tesco delivery van like some of my friends, but nonetheless I want to be out there performing.

“I’ve done a Christmas show for about 10 years — not the same material, obviously — and it was really weird when Paul said, ‘Would you like to do December 28?’

“Originally I wasn’t sure and then I thought, do you know what, there’s a real barren time between Boxing Day and New Year.

“We’ve all had our bubble and squeak and then we’ve all got to pretend we’re looking forward to New Year’s Eve, when someone like me absolutely hates kissing strangers in pubs.

“And I just thought, actually, Paul, that’s not a bad idea — it is a barren time, maybe people do want to come out and be entertained.

“I can still do my Christmas show because it is that period, but I’ve never done a show between Boxing Day and New Year before, so I fancied the idea tremendously.”

One thing is for sure, Digance has no plans to retire any time soon.

Recalling the period at the start of the coronavirus pandemic in March last year, he says: “I think with the first lockdown of three weeks we all thought it was a bit of a holiday. I certainly didn’t mind a couple of dates being cancelled.

“My hobbies are basically painting — I don’t mean decorating — and I’m a very keen fisherman, which is also quite isolated, so I’ve never had to adjust my pastimes, if you like.

“I’m quite a private person. I’m not a London nightclubby person at all and therefore I can live my life hobby-wise without all this — but all this is actually my biggest hobby.

“It’s a luxury to have your greatest hobby as your living, but what’s the point of retiring when I would still go into my lovely studio and produce music? It just doesn’t enter my head.”

Keeping his creative juices flowing is important to Digance.

He says: “I think that was a lesson I learned in 2020. This year was a bit weird because I was up for it but a lot of audiences not so much. I did a lot of venues where people were distanced. Some were masked, some weren’t. ‘Can we sing? Can’t we sing?’

“It made it very difficult for a performer like myself who indulges in audience participation and you have in front of you a crowd who weren’t sure whether or not they were allowed to participate. I found it very Jekyll and Hyde, so I readjusted the show so that it was more listenable as opposed to join in-able, if there is such a word. That seemed to work but it was a massive departure for me.”

He brightens when asked about playing the Crooked Billet again.

“I love doing places like Stoke Row,” he says. “I really look forward to it.”

Not least because of the quality of the pub’s culinary offerings.

“It’s my greatest meal of the year,” he laughs. “It’s the only time the whole year that I ever eat before a show. Normally I can’t, but I have a lovely meal there.”

Having packed out some of the UK’s biggest venues in his time, Digance now appreciates being able to make eye contact with his audience.

“I spent 40 of my 54 years in showbiz singing into darkness,” he says. “You know, when you’re really popular in terms of box office and you’re playing the Hexagon or you’re playing those bigger venues, I can’t even see an audience — I can hear them but I can’t see them.

“It is like standing in the middle of the M25 and doing a show. But that’s not the way it is with smaller venues because I can see the people, I can see them laugh and I can hear them joining in — and, of course, that’s an attraction.

“It’s like how I started out, doing the university circuit and so on with students, and I never really expected to play to 2,000 people in darkness, to be honest. I mean, it was very nice at the time.

“All I’ve really done, when you think about it, is gone full circle — and I’m still enjoying it.”

• Tickets for Richard Digance’s Christmas show cost £25 in the form of a music cover charge. To book a table, call (01491) 681048 or visit www.thecrookedbillet.co.uk