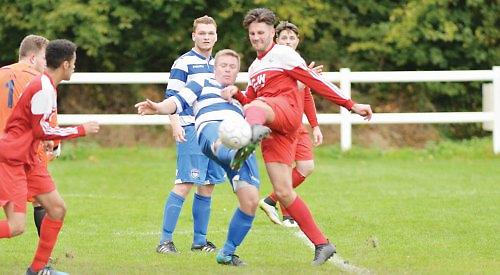 HENLEY TOWN crashed to their eighth consecutive Uhlsport Hellenic League Premier Division defeat on Saturday as they went down 4-0 away to Royal Wootton Bassett at the Gerard Buxton Sports Ground.

In the damp conditions the Red Kites went into half time trailing by just one goal before conceding three in the second period as the hosts recorded their fourth consecutive victory.

Henley started brightly and after three minutes Chris Hood won the ball in the penalty area but his snap shot was turned around the post by a fast reacting Curtis Meare in the home goal.

The hosts took the lead after 19 minutes when Sam Packer played a return pass to set free right winger Dan Bailey who cut the ball back from the byline for Steve Robertson finish into the top right corner giving Henley keeper Matt Hill no chance.

Packer came close to doubling the lead moments after Robertson had struck, hammering a 20-yard shot from the right edge of the area narrowly past the opposite post.

On 33 minutes, Packer, aided by a slip from his marker Mitch Cooper, raced onto Corcoran's clipped ball over the top and found himself with only Hill to beat but his lob went narrowly over the bar.

The hosts doubled their lead in the second half when Dale Richards guided home with a header from 10 yards.

Richards went close to adding his second soon after but his header was saved by Hill on the goalline.

On 70 minutes substitute Kias Bonner-Shaw cut
inside from the right and saw a shot from a tight angle blocked. The rebound
fell to Robertson who fired home to make it 3-0. Soon after Ryan Withers raced clear before coolly picking out the bottom corner when one-on-one to wrap up the scoring.