Hurricanes blown away by Hounslow 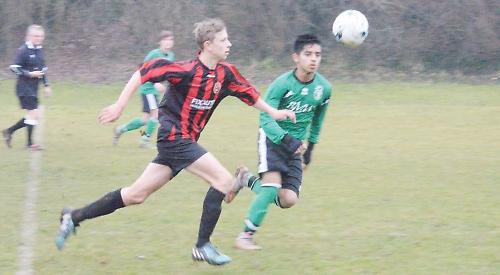 Following the previous week’s win at Maidenhead, the side could not match the competitive edge or the fluency demonstrated in that game.

After an even first 20 minutes Henley could not establish any meaningful possession in the middle third and were 2-0 down to two long range shots at half-time.

The second half was a more open game, Henley’s passing improved and they were unlucky not to score, a James Goulden follow-up ruled offside.

The home side did have the ball in the back of the net with Archie Thatcher’s re-possession on the edge of the box followed up with a good finish.

Hounslow’s best chance was stopped by a smart save by Henry Harmer. Henley then dominated for a spell, Harry Green consolidating midfield, but an own-goal from a Hounslow corner four minutes from time finished the revival.

AFC HENLEY HURRICANES U10s slipped to a 4-2 away defeat at FINCHAMPSTEAD MARLINS U10s as their cup campaign came to a fruitless conclusion.

The visitors started well as Nicolai Bruun-Andersen and Joe Turner had some neat combination play down the left which set up Finnbar Scott who came close to scoring early on.

Captain and man-of-the-match Tom Yeoman played well and was helped out by defensive midfielder Olly Saunders. The hosts started to creep back into the game in the second quarter and Ben Horner was called into action on a number of occasions to keep the scores level at half-time.

It all started to unravel for the Hurricanes in the third quarter as their energy levels dropped and with it their performance as they conceded three goals.

The Hurricanes finally lifted their game in the last quarter to mount a challenge. Tom Yeoman’s bursting forward run set up Scott who made no mistake from eight yards out. More Hurricanes pressure followed and both Yeoman and Tom Atkinson went close.

Against the run of play the Marlins scored their fourth but the
Hurricanes responded well again as Tom Atkinson cut in from the right and fired in their second goal low beyond the keeper. More Hurricanes pressure followed but it was too little too late.