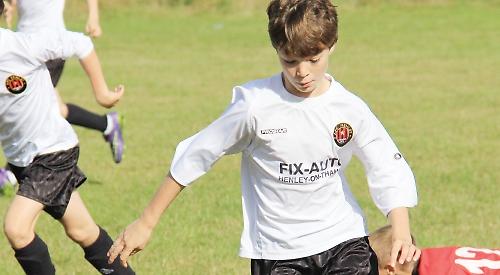 NEWLY-PROMOTED AFC HENLEY HURRICANES U10s kicked off their East Berks League Division A campaign in style with a convincing 8-3 win at Jubilee Park against the EVERSLEY AND CALIFORNIA RENEGADES U10s on Saturday.

Hurricanes’ Tom Yeoman was the star of the show as he presented his team mates with five assists as well as getting his own name on the score sheet.

The visitors took an early lead before Yeoman started to pressurise the Eversley defence to such an extent that he forced them to concede an own goal to level the scores.

The second quarter started in similar fashion with the visitors taking the lead once more. This time it was Tom Atkinson who responded for the hosts as he put in an inch-perfect corner that Sam Winters headed in from close range from which he had to leave the field with a bleeding mouth.

Man-of-the-match Tom Bonser anchored the midfield well and shielded the home defence with tenacity from the Renegades’ attacks. However, the visitors scored again to take the lead for the third time as they went into half-time leading 3-2.

A reshuffle by the home side led to a much improved second half performance. Luca Thomson moved up to support Yeoman in attack and this reaped instant dividends as Thomson poached the equaliser after good work by Yeoman.

Yeoman was proving a menace up front and again his incessant running and pressure led to another own goal being conceded by the visitors. Yeoman then released Thomson again and the duo partnered up for the second time as the latter bagged a brace to make it 5-3 at the end of the third quarter.

Joe Turner’s tough tackling and clever forward play linked the defence with the attack and this allowed Yeoman to thread a through ball to Winters whose power-packed shot rattled in off the crossbar to make it 6-3.

Yeoman eventually got his name on the score sheet by going on an individual run and firing in beyond the keeper.

Ben Horner in the home goal had little to do in the second half but he pulled off a good save and handled the ball very cleanly when required.

There was still time for another goal as an Atkinson free kick drew a good save from the visiting keeper but Olly Saunders was quickest to react to make it 8-3.