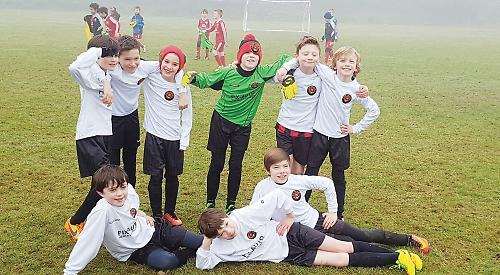 THE U10 AFC Henley Hurricanes came from two goals down to beat Windsor Typhoons 4-3 in a thriller at Jubilee Park.

As has been the case for most of the season the Hurricanes had a slow start as they showed too much respect to the opposition.

They sat off their Division A opponents and quickly found themselves a down as the Typhoons were able to pick their passes out and find the gaps in the hosts’ defence.

Goalkeeper Olly Saunders was under pressure from the start and pulled off a number of good saves but one goal quickly became two and the Hurricanes were in danger of being swept away as they could not get into the rhythm of the game.

With the Hurricanes two goals down at the first quarter break, their management team had to issue some stern words to get the team back in the game.

The hosts started the second quarter in much better heart and started to press. Instrumental to this was Tom Yeoman who began to control the game from the centre of midfield with some powerful tackling and penetrating runs.

Captain Luca Thomson also stepped up to the mark as his no nonsense defending and strength in the tackle saw him blunt out the Windsor attacks.

Tom Bonser was also starting to get things moving for the Hurricanes as his quick feet and clever passing moved the hosts forward.

It was now the Typhoons who were caught in a storm and as the pressure mounted the visitors’ keeper was forced to pick up a back pass to give away an indirect free kick eight yards out. Sam Winters tapped the ball to Nicolai Bruun-Andersen and he unleashed a thunderbolt which shook the goal off its standing.

With the Hurricanes now just a goal down at half-time the momentum was beginning to swing in the hosts’ favour. After the restart Tom Atkinson was pulling all the tricks out of the bag as he danced his way along the right touchline to set up a number of chances for the Hurricanes.

But the Typhoons restored their two-goal advantage against the run of play as the Hurricanes were caught napping in defence. The Hurricanes retaliated with Winters who bulldozed his way through the Typhoons’ back line to grab a goal back before the final quarter.

The never say die attitude of the hosts was there for all to see in the fourth quarter as they poured forward in a blizzard of attacks.

Joe Turner set up the equaliser as he burst forward and drew a great save from the Windsor keeper.

But he could only parry the ball into the path of Winters who was on hand to bury the rebound and set up a barnstorming finish. There was only going to be one winner as the game neared its conclusion.

Winters picked the ball up 30 yards from goal and only had one thing on his mind as he drove forward to smash the ball past the Windsor keeper to send the home crowd into raptures.

The striker claimed the match ball as he finished the campaign off as he had begun it with a stunning hat-trick.