Lions roar to victory on their junior premier league debut 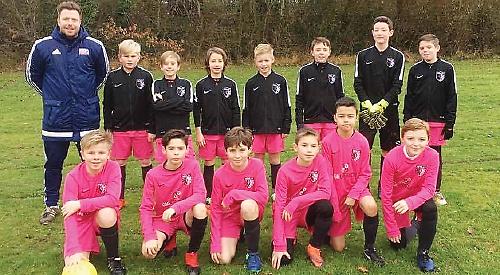 HENLEY LIONS U11s progressed to the next round of the Junior Premier League Cup after defeating the Arsenal Devon-based soccer school 2-1 last weekend.

The Lions, who were formed last year, are the only registered club with the Berks and Bucks FA who currently play in the Junior Premier League for elite players which is an invite only competition.

Following a long journey down to Devon to make their cup debut the Lions were quick out of the blocks playing good possession football and creating a lot of chances.

The Lions broke the deadlock with a through ball from Milligan finding Saia in space to slot the ball into the far corner.

Following a good first half performance and getting used to the longer duration and bigger pitch the Lions became tired and this allowed Arsenal to dominate the second half possession. However, the Lions always looked dangerous on the break and Jackson played a through ball to Maslen who passed across goal for Day to sweep home.

Arsenal became stronger and stronger and pressed harder as the game progressed creating lots of chances and finally pulled a goal back, firing into the bottom corner.

This created an edgy last 10 minutes but the Lions held firm and kept them at bay to progress to the next round where they will face Peterborough this weekend in the quarter-finals.